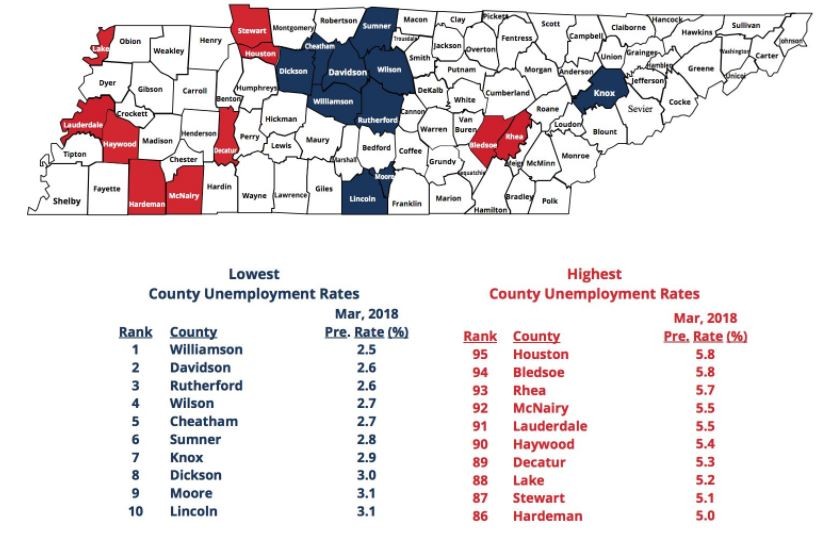 NASHVILLE – The Tennessee Department of Labor and Workforce Development (TDLWD) today released the March 2018 unemployment rates for each county in Tennessee. The newest statistics highlighted improved rates during March for the majority of the state’s counties.

Williamson County once again had the state’s lowest unemployment rate at 2.5 percent. That number did increase 0.1 of a percentage point from the previous month.

At 2.6 percent, Davidson County’s rate was the same as its February rate and was the second lowest in the state. Rutherford County also had a March rate of 2.6 percent, which was 0.1 of a percentage point lower than the month before.

“It‘s encouraging 82 counties across our state experienced lower unemployment last month,” said TDLWD Commissioner Burns Phillips. “What’s even more encouraging is the news coming out of counties like Houston and Bledsoe. While they have the highest rates in the state, their figures are considerably lower than they were in February.”

The statewide unemployment rate is seasonally adjusted, while county rates are not. Seasonal adjustment is a statistical technique that eliminates the influences of weather, holidays, the opening and closing of schools, and other recurring seasonal events from an economic time series.

A complete analysis of the March 2018 county unemployment rates can be found here. Additional information on labor statistics can be found on the state’s workforce website.