NASHVILLE, Tenn. – October 10, 2019 – The Tennessee Higher Education Commission (THEC) today released the latest student enrollment data for the fall 2019 semester, indicating an increase of 1,541 students, which is a 0.7% increase compared with 2018.

“This is our fourth year of continued enrollment growth in Tennessee. It is encouraging to see our state’s continued momentum at a time when many states are experiencing a decline in higher education enrollment,” said THEC Executive Director Mike Krause. “This indicates progress toward our goal of having 55% of Tennesseans with a degree beyond high school, and most importantly, our ability to ensure an educated workforce.”

The Tennessee Board of Regents (TBR) reported that 87,863 students enrolled in community colleges this fall, with Cleveland State and Roane State Community Colleges experiencing the largest growth at 3.2% and 3.1%, respectively.

Among locally governed institutions (LGIs), significant increases occurred at both the University of Memphis and Tennessee State University. 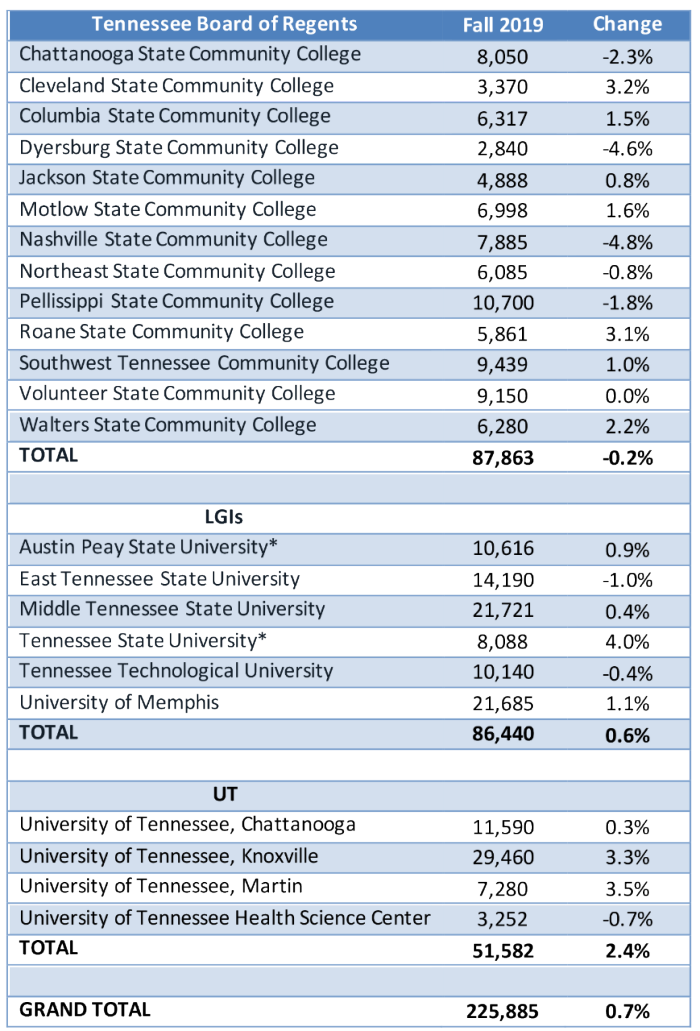 Note: * In this table, the fall 2018 comparison reflects APSU's Fall I count, which is comparable to their
Fall 2019 data (this excludes the Fall II count at Fort Campbell).
**The increase in headcount total year over year for TSU can be partially explained by significant growth in their graduate school headcount due to a new single course offering in coding.