NASHVILLE – This weekend, the Tennessee Bureau of Investigation will mark the 25th anniversary of its successful ‘Top 10 Most Wanted’ program. 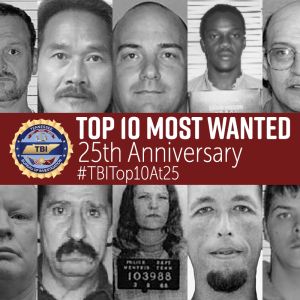 Launched on May 5, 1993, the program harnesses the TBI’s relationship with the media and the public to bring attention to dangerous fugitives believed to be in Tennessee, while offering cash rewards for information leading to successful captures.

Since the start of the program, the TBI’s Top 10 program has contributed to the capture of more than 400 dangerous fugitives, including several high-profile cases:

• Terry Lee Charlton: The first individual added to the Top 10 Most Wanted, Charlton was wanted to face multiple counts of Aggravated Burglary. He was arrested 18 months later, after a lengthy investigation led by Special Agent Mark Gwyn, who would later become the agency’s Director.
• Margo Freshwater: The first woman added to the TBI’s Top 10 Most Wanted (in May of 1993), Freshwater escaped the Tennessee Prison for Women in 1970, while serving a life sentence for murdering a store clerk in Memphis in 1969. She was captured in Columbus, Ohio in 2002.
• Adam Mayes: Added to the Top 10 in May 2012, Mayes was involved in the murder of a woman in Whiteville, along with the kidnapping of the woman’s two younger daughters. After a five-day search, a tip from the public led authorities to a heavily-wooded area in Mississippi, where Mayes took his life and the girls were rescued unharmed.

“The Top 10 program has been an invaluable partnership between the TBI and the public. When we share information about dangerous fugitives, the public pays attention, stays vigilant, and offers tips, which can make the difference in getting these individuals back in custody,” said TBI Director Mark Gwyn. “We look forward to that continued partnership well into the future.”

Currently, only one of the original individuals added to the Top 10 in May 1993 – Robert Houston Sanders – remains on the list, and efforts to locate him remain ongoing. The public can access the full ‘Top 10 Most Wanted’ list on the TBI’s website.