How Is TVA's PILOT Calculated? 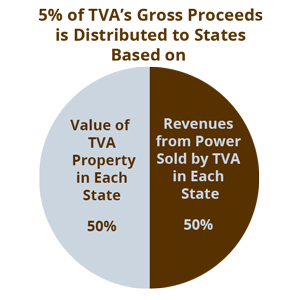 TVA’s PILOT is based on 5% of its prior-year gross proceeds from power sales excluding direct sales to federal agencies.  The PILOT is divided among the eight states where TVA has power property, which includes not only facilities that generate electricity but also coal assets, property used to transmit electricity, and a portion of the overall value of TVA’s reservoir properties.

Each state’s allocated amount is based both on revenue from power sold by TVA in each state and on the value of TVA power property located in each state:

Each state determines how to distribute its share of the PILOT remaining after the following adjustments:

Mississippi is currently the only state in which TVA operates power property owned by another entity—the Caledonia Combined Cycle Plant in Lowndes County.