Petitions: a More Efficient and Inclusive Method of Annexation

Twenty-five states avoid the problems associated with referendums by allowing petitions to effect annexations.  In fact, petitions are the most common method used by other states to allow non-resident owners, including corporate owners, to participate in annexation decisions.  In most of the 25 states, the petition process is merely to request annexation by a city or in a few cases to request a referendum on annexation.  Three states—California, Nevada, and Wyoming—however, authorize petitions as a decisive vote rather than as a request for action by the city by allowing opponents to block annexations in a petition process that occurs after the city has decided the issue.

Who is permitted to sign the petitions varies among the 25 states allowing petitions to effect annexations.  Fourteen allow only landowners to participate in the petition process and do not allow residents who do not own property to sign annexation petitions.21  Eight states require petitions to include both landowners and residents, sometimes with different thresholds for each (see table below).  North Dakota allows petitions from either landowners or residents.22  Mississippi and Texas are the only states that allow only residents. 23  Corporations and businesses owning land are allowed to participate in the petition process in states where landowners can sign.  Typically, states permit a business that owns property proposed for annexation to designate one agent to sign a petition for annexation. 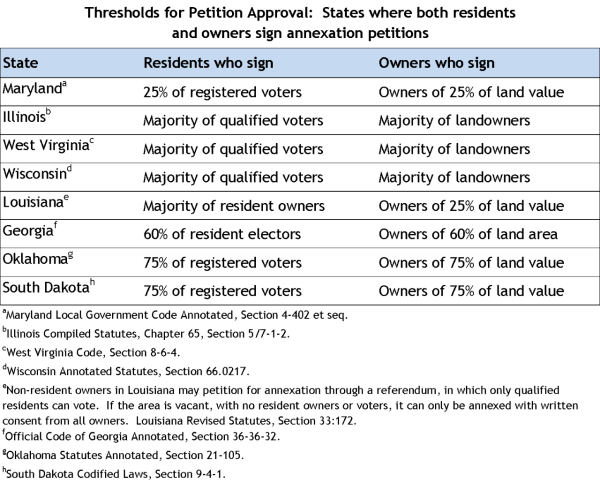 The 2013 Tennessee Attorney General’s opinion saying that residents cannot be excluded from voting in referendums simply because they don’t own property in the area to be annexed may apply to annexation petitions as well if they decide the issue.  In the one state where residents who were excluded from a petition process sued, North Carolina, the court found the petition process analogous to a vote because the petition decided the issue and ruled the statutes allowing it unconstitutional.24  A petition process that does not decide the issue, one that is simply a request for annexation, would likely not be subject to the same constitutional constraints.

City representatives from several states say their petition processes are less costly than referendums and less cumbersome unless the annexation is large enough to make obtaining many signatures on a petition more difficult.25  Petition processes structured to avoid the costs associated with providing individual ballots, programming and using voting machines, securing polling locations, compensating election workers, and providing notices and hearings are cheaper than elections.  Some states require the owner or owners petitioning for the annexation to bear the cost of the petition process, whereas referendums are paid for by the annexing city.