The THC’s State Historic Sites Program helps ensure the stewardship of some of Tennessee’s most significant places. This model program thrives today thanks to longstanding partnerships between THC and independent nonprofit organizations that raise funds and operate the Commission’s sites as historic resources for the state’s citizenry and visiting public.

Due to our long-range planning and the support of the Governor and Legislature, we are currently under construction, have recently completed, or are in project design or contract development with an unprecedented approximately $18 million dollars of capital improvements across the state—the most in the history of the agency. This will be a major contribution to assisting the sites with the slump related to the pandemic and position them for not only full recovery but improved, enhanced, and additional operational facilities and rehabilitated historic structures. In many ways this is a “golden age” in the history of the care, redevelopment, expansion, and preservation of the historic sites and the Historic Sites Program.

The Alex Haley House and Museum State Historic Site in Henning celebrated the wrap up of a $500,000 rehabilitation project this summer. Capital improvements at this site included replacing HVAC systems, mold remediation, security system repairs, and correcting a standing water problem at the house entrance. A major interior plumbing leak was discovered and repaired before any damage to the historic artifacts occurred. Alex Haley’s tomb received additional site maintenance. This property, the first African American historic site owned by the state, was listed in the National Register of Historic Places in 1978. Author Alex Haley is buried on the grounds of the bungalow built in 1919 by his maternal grandfather. On this porch, Alex listened to the stories about his ancestors that led to his renowned classic, Roots. In 2010, THC dedicated the state-funded Alex Haley Museum and Interpretive Center. On August 13, 2021 a festive ribbon cutting ceremony took place to commemorate the 100th anniversary of Alex Haley’s birthday and to rededicate the site after the completion of the rehabilitation of the home and Alex Haley’s gravesite.

From 1899 to 1975, the Burra Burra Mine State Historic Site, Ducktown, was headquarters for the Tennessee Copper Company’s mining operations. Owned by THC since 1988, it is one of the South’s few mining heritage museums. Ten original mine buildings remain on the 17-acre property, National Register listed in 1983. A $5.2 million dollar rehabilitation project has kicked-off, with the foremost masonry consultant in the US, John Speweik, preparing a report for state-of-the art repairs to the site’s masonry structures. The project includes geophysical analysis to determine stability for reestablishing the viewing platform and fencing at the edge of the site’s gorge. A consultant is also involved with identifying and outlining preservation processes for the approximately 30 unique pieces of mining equipment located across the site. Extensive reworkings of the cojoined Hoist and Boiler Houses to redevelop them as catering, rental, and public use areas will be an important part of the project as well as improvements to the museum and visitors’ center.

The Carter House State Historic Site, Franklin, was saved from demolition by the State of Tennessee and THC in 1953 and is now managed by the Battle of Franklin Trust. Built in 1830, it is one of 29 National Historic Landmark sites in the state. In a 1980s land swap, THC acquired an adjacent property for interpretation of the bullet-ridden structures that bear witness to the 1864 Battle of Franklin. Plans to construct a $6.5 million dollar visitor center at this site were put on hold until additional funding could be allocated in 2022. Repairs to the smoke house, farm office, slave cabin, and Carter House are also slated for next year as well as improvements to the museum, visitor’s center, and ten structures across the site.

The Chester Inn State Historic Site, Jonesborough, preserves one of Tennessee’s finest frontier era wood frame inns. Constructed on a prominent stage road in 1797, three U.S. presidents have been guests of this establishment. Restoration began in the 1990s, after THC acquisition. It is operated by the Heritage Alliance of Northeast Tennessee and Southwest Virginia. A $710, 000 capital project for HVAC replacement and historic exterior repair is in design development for this site.

THC offices moved from downtown Nashville to the restored Clover Bottom Mansion in 1994. Since then, the agency’s historic sites program has taken on the role of property steward, overseeing repairs and improvements to the mansion, historic outbuildings, and cemetery site. Repairs are in process by the Department of General Services (DGS) to the site’s storm damaged cemetery fencing. Recently, when the YMCA purchased the adjacent non-historic residential site, property lines were reestablished by DGS to maintain the historic cemetery’s National Register boundary. Overgrown fence lines separating the overseer’s house and cemetery from the main house have also been cleared to incorporate these sites into the broader main campus’ historical narrative.

Construction of the house now known as the Cragfont State Historic Site, in Castalian Springs, began in 1798 and ended in 1802. Named Cragfont because it stood on a rocky bluff with a spring at its base, the house typifies architecture of the late Georgian period. Historic paint analysis of the main house interior, by Matthew Mosca, has been completed and planning for a $8.2 million capital fund request to complete an exacting rehabilitation of the interior paint, historic rehabilitation of the main house, and the addition of a special event and catering pavilion and complex is underway. Site and pond irrigation repairs were made and interior professional cleaning conducted, in support of the historic house museum’s revised collections policy.

The Hotel Halbrook Railroad & Local History Museum State Historic Site, Dickson, is home of the Clement Railroad Hotel Museum. The 1913 building is one of the few remaining examples of a railroad hotel in a small Tennessee town. Functioning as a working man’s hotel until 1954, it opened to the public as a historic site in 2009. It recently became the town’s visitor center. A $550,000 HVAC and building repair project and analysis of masonry issues in the attic are underway, after the 2020 completion of a $330,000 historic window rehabilitation project.

Hawthorn Hill State Historic Site, Castalian Springs, a rare brick hall-and-parlor floor plan I-house, is the birthplace of Tennessee Governor and Confederate general William B, Bate, as well as the former residence of Grand Ole Opry pioneer, Dr. Humphrey Bate. THC acquired the c. 1806 structure in 2007. Much of the interior stenciling survived intact and wall finishes have been conserved or restored following paint analysis, as part of a three-year restoration project.

In 1969, the State of Tennessee purchased Rock Castle, a blend of Federal and Georgian architectural styles that was the home of pioneer surveyor Daniel Smith. Construction began in 1784 on this, the oldest permanent building listed on the National Register of Historic Places in Middle Tennessee. The 18-acre Rock Castle State Historic Site in Hendersonville is administered by the Friends of Rock Castle. HVAC repairs and replacement took place this year. Capital projects planned for this site in 2022 include sitewide landscaping, reconstruction of historic gardens, shoreline stabilization and dock, storage and maintenance barn, performance stage, as well as a new Visitor’s Center/Event Space for $7.26 million.

In 1941, the Daughters of the American Revolution obtained funding from the State of Tennessee to purchase and restore the Rock House as a public museum and local chapter meeting place. The small stone structure was built between 1835 and 1839 to collect tolls on a private road near Sparta. Andrew Jackson, James K. Polk, Sam Houston, Frank Clement, among other notable visitors, stopped at the Rock House. In 1973, the structure now known as the Rock House State Historic Site was added to the National Register of Historic Places. A $620,000 capital repair project will address a thorough historic reinterpretation of the building’s interior, exterior, and site.

In 1962, the State of Tennessee purchased Rocky Mount, a log house that was built on the location of the capitol of the old Southwest Territory. Through dendrochronology studies, the construction date of the present home in Piney Flats was found to be the late 1820s. Complete with kitchen, barn, and weaving cabin outbuildings, it operates as the Rocky Mount State Historic Site, managed by the Rocky Mount Historical Association. A $189,000 HVAC system reconfiguration project is underway at this site to complete a mold remediation cleanup (approx. $100,000) after a $500,000 visitors’ center and site improvements project in 2019.

Sabine Hill State Historic Site, Elizabethton, is a circa 1818 Federal-style I-house that was threatened with demolition and purchased by THC in 2007. Restored as a THC capital project, it opened to the public in 2017. It is administered as a unit of Sycamore Shoals State Park. THC staff recently oversaw the completion of the kitchen’s historic paint finish conservation project that capped a total building and site rehabilitation of $1.1 million dollars.

Sam Davis Memorial, Pulaski, is the smallest THC site. A small structure preserves the site where Confederate Sam Davis was hanged. Repairs to the engaged gutter system are underway as well as repairs to related interior leaks. The site has received an HVAC system replacement in the recent past.

The Sam Houston Schoolhouse State Historic Site in Maryville was listed on the National Register of Historic Places in 1972. In 1945, the State of Tennessee purchased the schoolhouse and adjacent property where Sam Houston taught before the War of 1812. Operated by the Sam Houston Memorial Association, it exemplifies late 18th and early 19th century field schools. The site has had extensive tree maintenance and general site repairs in the past year.

The Tipton-Haynes State Historic Site, Johnson City, is operated for THC by the Tipton-Haynes Historical Association, Inc. All but the roof replacement of a $750,000 structural repair project wrapped up this year and a $2.45 million capital project will address the historic interiors across the site. The roof project was placed on hold due to the nonavailability (a pandemic supply issue) of appropriate white oak logs to split for historically accurate roof shakes.

As the Wynnewood State Historic Site, the 1828 inn and mineral springs resort complex in Castalian Springs, transitioned to Historic Castalian Springs management. In 1970, the State of Tennessee purchased the largest extant log structure in the state, Wynnewood, from the last descendant living in the ancestral home. The following year, it was designated a National Historic Landmark, one of 29 in the state. Severely damaged by tornado in 2008, the house was restored by THC and reopened to the public in 2012. The roof project was placed on hold due to pandemic-related supply shortages of white oak long to split for roof shakes. Repairs to the dry stack stone wall by the site’s barn were completed at a cost of $90,000. Site repairs, tree trimming, and bush hogging were also completed this year. 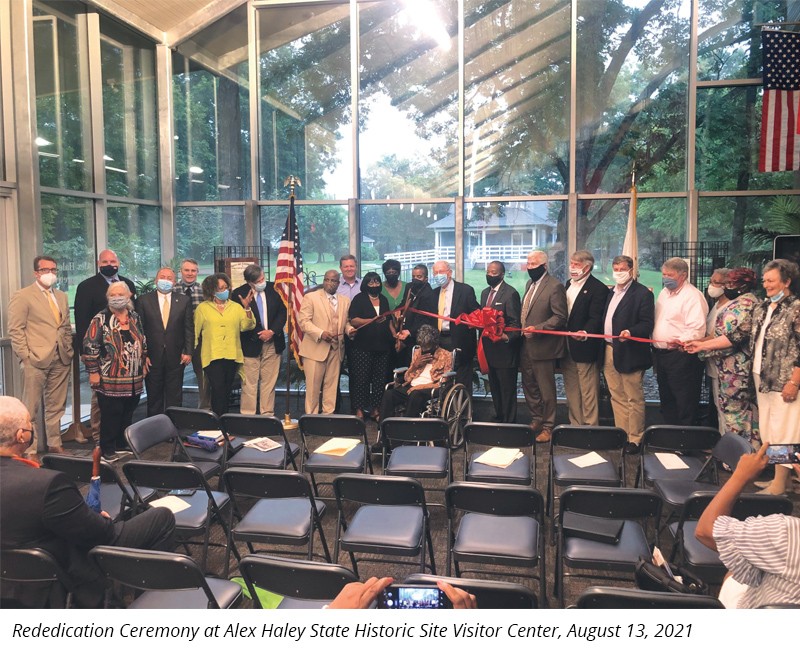