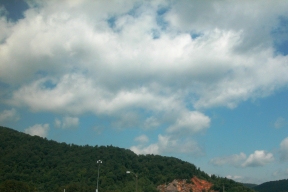 Why is clean air important to health?

Air in its purest state is best suited for the essential task sustaining life.  Air pollution is a major environmental risk to health. Air pollution can trigger heart attacks or strokes. In fact, one in three Americans has heart disease which can be worsened by air pollution. Breathing clean air can lessen the possibility of disease from stroke, heart disease, lung cancer as well as chronic and acute respiratory illnesses such as asthma. Lower levels of air pollution are better for heart and respiratory health both long- and short-term. Learn about the many ways air pollution can harm your health and the atmosphere.  Find out what you can do to help protect the air we breathe.

What about physical activity limitations and air quality forecasts?

The Air Quality Index (AQI) is an index for reporting daily air quality. It tells you how clean or polluted your air is, and what associated health effects might be a concern for you. The AQI focuses on health affects you may experience within a few hours or days after breathing polluted air.

An AQI value of 100 generally corresponds to the national air quality standard for the pollutant, which is the limit the U.S. Environmental Protection Agency (EPA) has set to protect public health. AQI values below 100 are generally thought of as satisfactory. When AQI values are above 100, air quality is considered to be unhealthy at first for certain sensitive groups of people, then for all people as AQI values get higher.

Air quality forecasts provide information to the public about ground level ozone and PM2.5, which is a measure of particulate matter 2.5 microns or less in size, and their associated health effects. Pollutant-specific health effects statements and cautionary statements are provided along with the forecasts.

A forecast is used to alert those in an area that may be sensitive to elevated levels of ozone so that they can make decisions related to their daily activities. However, the air quality forecast is exactly what it says—it is a forecast. Just as television meteorologists sometimes miss whether it will be cloudy or sunny in our area, sometimes forecasters will miss the actual PM2.5 and ozone category or color code for the day. If there is any question as to how a day will be forecast, every effort is made to err on the side of over-predicting the expected maximum concentration as the intent of this forecasting process is to protect the health of citizens.

What’s a permit; how does it protect me?

An air permit limits how much of a contaminant can be emitted from a source into the air that we breathe.  The requirements for limiting the emission of airborne contaminants look at the health effects on people.  Air permits can also consider effects on animals, vegetation and property.  Variables include the amount of the pollutant and point of the potential exposure.  When multiple sources of a pollutant exist in an area, a limitation of the emission from each source must be enforced, and the individual contribution to the total pollutant load in the area must be reduced.  This is done to comply with EPA ambient air quality standards. Limiting the contact is done by the application of emission standards.

Ambient air quality standards are further intended to promote the maximum use of property. When the problems involved are esthetic in nature, an economic balance must be achieved. When a health hazard is involved, there can be no compromise and the standards must be upheld.

What are common air pollutants?

What is a non-attainment zone?

According to United States’ environmental law, a non-attainment area is an area considered to have air quality worse than the National Ambient Air Quality Standards (NAAQS) as defined in the Clean Air Act Amendments of 1970. Non-attainment areas must have and implement a plan to meet the NAAQSs, or risk losing some forms of federal financial assistance. An area may be a non-attainment area for one pollutant and an attainment area (lower than or meeting the NAAQS) for other pollutants.

Why is air quality important for development?

Reducing air pollution forms the basis of economic growth and future development.  Organizations can minimize the amount of contaminants entering the air from their facility to become more competitive and successful in their respective fields, while preserving the environment.  Conservation of air as a natural resource begins by preventing or reducing air pollution.

The Tennessee Department of Environment and Conservation’s Division of Air Pollution Control directly serves 91 counties within the state by monitoring industries, conducting source visits, testing and monitoring air at the various stations set up across the state and other tasks. The Division of Air Pollution Control also oversees and assists in the actions of local air pollution control programs in Davidson, Hamilton, Knox and Shelby counties. If you live in Davidson, Hamilton, Knox or Shelby counties you must contact these local air programs for further air testing information.

What about indoor air quality?

Indoor air quality (IAQ) is a term which refers to the air quality within and around buildings and structures, especially with regard to the health and comfort of building occupants.  Maintaining a healthy indoor building environment is important to all aspects of life.  Healthy indoor air quality leads to greater productivity at work and school; and better health at home.

Indoor air quality can be affected by gases such as carbon monoxide, radon or volatile organic compounds.  Air quality can be reduced by particulate matter from burning wood or charcoal.  Environmental tobacco smoke, mold and ozone can also reduce air quality.

Some ways of improving indoor air quality in buildings are source control, filtration and ventilation.

What is a greenhouse gas?

Greenhouse gases in the Earth’s atmosphere absorb infrared radiation from the sun and release it. Some of the heat released reaches the earth, along with heat from the sun that has penetrated the atmosphere. Both the solar heat and the radiated heat are absorbed by the Earth and released; some is reabsorbed by greenhouse gases to continue the cycle. The more of these gases that exists, the more heat is prevented from escaping into space and, consequently, the more the earth heats. This increase in heat is called the greenhouse effect.

Common examples of greenhouse gases, listed in order of abundance, include: water vapor, carbon dioxide, methane, nitrous oxide, ozone and any fluorocarbons. Although water vapor is the most abundant greenhouse gas, it is a relatively ineffective one. Some degree of greenhouse gases in our environment is only natural. Without the greenhouse effect our ecosystem would not be possible.

Since the industrial age began in the 1750s, however, carbon dioxide alone has increased by 40%. Concerns about the greenhouse effect's contribution to global warming have prompted agreements between various governments on targets for reduction of greenhouse gas emissions.

Where can I get data about my community?

One location to obtain information about your community is EPA’s AirNow website: https://www.airnow.gov/#TN. This website gives information about Tennessee as well as other major cities across the United States.

Information about individual air monitors set up and run by the Division of Air Pollution Control can be found at: www.tn.gov/environment/program-areas/apc-air-pollution-control-home/apc/air-quality-forecasting.html.