What was the situation?
The federal Agency for Toxic Substances and Disease Registry's Soil Screening, Health, Outreach and Partnership or SoilSHOP helps people learn about the quality of their soil for safety and gardening.  SoilSHOPs are a great tool for increasing community awareness near old industrial sites, environmental spills or community gardens.

What was done to assist the community?
Department of Health staff from Environmental Epidemiology and Family Health & Wellness joined with CDC, EPA, TDEC and a host of other agencies to hold our first SoilSHOP in Chattanooga.  In an effort to provide outreach and education for Lead Poisoning Prevention Month as proclaimed by Governor Haslam, residents were invited to bring soil from their yards to be tested for lead and other heavy metals.  Thankfully, most samples screened were in an acceptable range.  Additional health education was provided for those families whose soil had a high concentration of lead.  Planning for future events is expected. 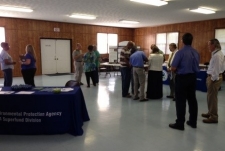 What was the situation?
From the 1880s until 1996, a large manufacturing plant operated in Hickman County.  Many of the workers lived in a community that would become Wrigley.  Wrigley Charcoal manufactured charcoal and charcoal briquettes and sold by-products of wood distillation such as wood alcohol, acetic acid, wood oils, coke and pitch.  Numerous wastes left on and buried under the Wrigley Charcoal Site from its industrial past put it on the National Priorities List (NPL) of hazardous sites in most need of cleanup.  Years later, a plastics recycling business operated on the old Wrigley Charcoal Site.  In 2013 a fire burned many of the plastics.  People within 1.5 miles of the fire were encouraged to evacuate.

What was done to assist the community?
Working to clean up the site, the U.S. Environmental Protection Agency hosted a public availability session.  The public was invited to a local community center which was set up with exhibit booths to explain the cleanup and to answer questions.  Our Environmental Epidemiology Program and our state partner the Tennessee Department of Environment and Conservation each hosted an exhibit booth.  We discussed health concerns with members of community.  Many of their concerns were about the plastics fire, cancer rates, air quality, site reuse and waste management.  A follow up Frequently Asked Questions (FAQ) letter was prepared to share with all who attended the public availability session.

Protecting Children from Vapor Intrusion inside a Daycare

What was the situation?
In early 2011, TDEC’s Division of Remediation asked TDH EEP to evaluate what should be done to investigate a groundwater plume of tetrachloroethylene. TDEC was worried that vapor, off-gassing from the contaminated groundwater, could migrate upwards into the indoor air of buildings nearby. One of these buildings happened to be a daycare. It was unknown if groundwater was flowing toward the daycare. Children in the daycare could be at risk if the contamination had migrated under the daycare and vapor intrusion was occurring.

What was our public health impact?
Soil-gas was sampled around the building and air was tested inside the daycare. The levels of chemicals were not found to be appreciable. Children attending the daycare and daycare workers would not experience adverse health effects from breathing the indoor air of the daycare. 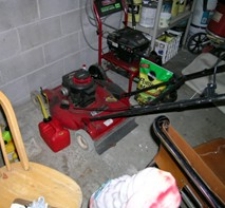 Sampling Indoor Air in Homes Near a Lacquer Manufacturer

What was the situation?
In late 2009, EEP was asked by TDEC’s Division of Remediation to sample indoor air in three homes located near a lacquer manufacturing plant. TDEC was concerned about the indoor air in the homes because environmental testing showed groundwater contaminated with acetone, toluene and benzene migrating beneath the homes. TDEC wanted to know if the residents of the homes were being exposed to vapors from these compounds. The vapors could migrate from the contaminated groundwater up into the indoor air of the homes.

What actions were taken?
EEP visited the homes to be sampled with TDEC DoR staff. EEP set up an indoor air sampling to collect 24-hour time duration samples inside three homes and one outside air sample. At the end of the 24-hour time interval, EEP and TDEC staff ended the test and picked up the samples. The samples were analyzed by a contract laboratory. EEP compared the results to Agency for Toxic Substances and Disease Registry and U.S. Environmental Protection Agency indoor air screening values and to residential background levels in U.S. homes.

How did this affect public health?
Levels of chemicals found in the indoor air of two of the three homes were of similar concentration to the outdoor background air sample collected. The levels were below those considered harmful to adults and children. Levels of benzene in one of the homes were above the outdoor background levels of benzene measured. The measured benzene level may have been related to storing gasoline and lawn equipment in the basement of the home. 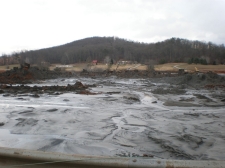 What was the situation?
One of the largest environmental disasters in the history of the U.S. occurred on December 22, 2008, when the retention wall of a coal ash holding pond failed at the Tennessee Valley Authority Fossil Plant in Kingston, Roane County, Tennessee. Following the TVA coal ash spill, the Tennessee Department of Health responded as members of the unified command structure set up by EPA Region 4. TDH staff worked with other agencies to evaluate the impacts of the spill on public health. EEP assisted by collecting samples, organizing data and communicating with the public.

What actions were taken?
TDH staff gathered sampling data from all agencies – governmental and non-governmental and for all environmental media – air, surface water, groundwater, soil and sediment. The data were presented and interpreted in a Public Health Assessment for the TVA Coal Ash Release, dated September 7, 2010. Additionally, staff from TDH and the National Center for Environmental Health performed an EpiAid to determine if residents experienced significant or unexpected adverse health effects after the spill. Staff teams visited 324 residences with 1.5 miles of the spill in early January 2009. TDH also provided education to area health care providers on January 21 and 22 and March 17 and 18, 2009.

What was our public health impact?
The sampling data was continuously gathered and analyzed to determine the likelihood of adverse effects on human health. Oak Ridge Associated Universities and Vanderbilt University Medical Center conducted a clinical evaluation of people living near the spill. Vanderbilt University Medical Center’s Dr. John Benitez performed the free health screenings in the local community between September 2009 and April 2010. The results were presented to the public on August 17, 2010. Because of his work, Benitez was awarded the Society of Toxicology’s 2012 Translational Impact Award in March 2012.