Breaking Ground 96 - My Brother Does Not Speak, but Supported Decision-Making Can Still Work 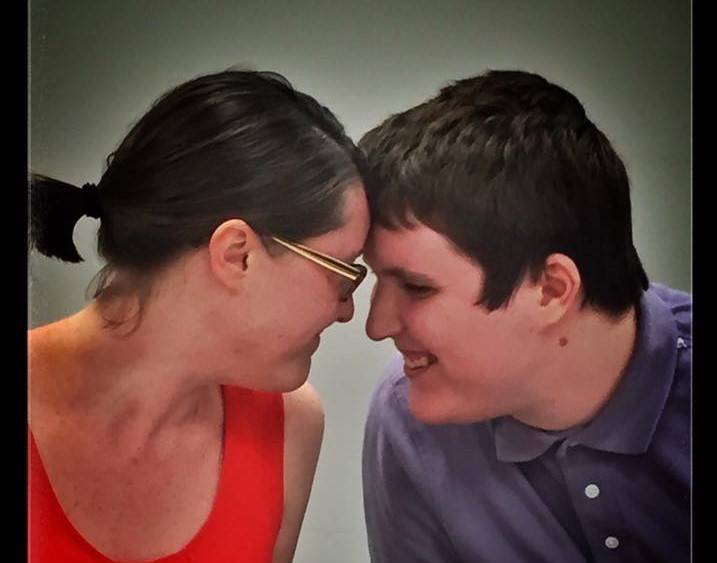 Author’s note: This article is printed with the permission of my brother, Evan. After writing it, I read it aloud to him and then, by typing, asked him if it was okay for this article about him to be in a magazine that lots of other people will read. He typed “yes”. Thank you to my Council colleague, Ned Andrew Solomon, for encouraging me to “practice what I preach” in this article by allowing my brother to choose what is shared publicly about his life!

My brother Evan is 23 years old and loves the outdoors, swimming, animated movies, listening to music and collecting all things medieval – you’ll rarely find him without a trusty figurine of a knight in shining armor, complete with a sword and steed. He enjoys hiking with our parents and watching movies with his twin brother Brendan. He also enjoys showing off his impressive knowledge of movie trivia when we play online quizzes together. He has an infectious smile, an incredible memory and a keen perceptive sense of how others are feeling.

Evan also has autism, and experiences many barriers in communicating with others using verbal and written language. He completed his school transition program in May at age 22 and for the past year has been living in his own apartment in Franklin with the support of a provider agency called Capital City, which is funded through Medicaid waiver services from the Dept. of Intellectual and Developmental Disabilities.

Evan does not speak very often, and when he does, it is sometimes difficult to understand him or it may not be the most accurate representation of what he wants to communicate. Often he may repeat the last thing or choice someone has said to him when he is asked a question. While he can read words, type words and write words, he very rarely does this independently to communicate what he is thinking or feeling or wanting. When he is able to type or write to tell us information, it’s usually single words or short phrases in response to a question, not proactive communication to tell us something he wants to say.

Over Evan’s lifetime, our family and his teachers, therapists and other professionals have tried all kinds of assistive and alternative communication devices and strategies. None of these technologies or programs has resulted in a reliable way for him to really communicate with us – yet. However, we know from observation that his receptive language is strong and he understands a lot of what is said to him, about him or happening around him – much more than many people realize. He taught himself how to Google things he is interested in and does this frequently, which is another way we get a glimpse into what he enjoys. He is very expressive and it is easy to know, after spending some time with him, how he is feeling about where he is and what’s going on from his body language, actions and facial expressions.

One typical way we try to find out what Evan wants is to write down, often on a white board or paper, a short list of choices for him to pick between by circling or pointing to his choice. Sometimes, I will type a question for him on my notes app on my phone and give it to him; depending on the type of question, he will often respond independently and appropriately with a couple of words. Other times, this method doesn’t quite seem to “click” and he’ll just hand the phone back to me. If it’s an important question, I will then try to find another way to present the information to him and do my best to get an answer.

For many years, my family and Evan’s teachers assumed that because of his communication and behavior challenges that he would not be interested in attending his IEP meetings. But a few years ago, we began inviting him to join us at the beginning of the meeting, and offered him the written option every few minutes to “stay” or “leave” so he knew that he had a choice. Sometimes he stayed for the whole meeting, wandering around and listening, or sitting at the table with a fidget toy. Other times, he’d choose to leave to go back to his classroom pretty quickly, and the team decided to meet without him, hoping that we would make decisions in his best interest.

He’s now had a few Individual Support Planning (ISP) meetings – kind of like an Individualized Education Plan (IEP) at the adult level - where we practice the same thing: assume that he should and wants to be there until or unless he wants to leave. This is a work in progress; maybe at some point, if we are really “meeting Evan where he’s at” the whole team can take some breaks, have some snacks, meet somewhere more comfortable than a conference room, do some preparation with Evan beforehand about things we plan to talk about, and really support him to feel comfortable enough to participate as much as he is able, with no decisions made without him unless absolutely necessary.

One way that I’ve tried to help Evan participate in these types of meetings is by sitting beside him with a pen and pad of paper, and trying to write down and “translate” some of the complex topics that we discuss into plain language, while offering him a chance to weigh in if he wants to and is able. This is not a perfect system – it’s hard to really know how much he understands and if I’m succeeding in giving him enough information to form an opinion and make a choice.

This past spring, we held our first meeting with Evan’s Vocational Rehabilitation counselor to discuss employment goals and we tried something new. I noticed that while the meeting opened with the counselor talking directly to Evan, because he did not verbally respond, soon the entire group (our parents, his support staff and other professionals in Evan’s life) began discussing potential employment options that they thought seemed best for Evan amongst themselves. Evan sat at the table, looking bored. Sitting next to him, I tried to quickly take notes in plain language and create choices for him on a notepad so he could weigh in, but the conversation was moving fast. I think we were both getting frustrated.

I noticed there was a large whiteboard in the room, so I stood up and asked if we could pause while I wrote on the board for Evan. I wrote “If I had a job, I would like to work at … “, and “If I had some money, I would like to buy…”. We started brainstorming aloud together about possible types of jobs or workplaces, and I kept a list on the board. Evan leisurely paced around the room and every so often would come by, take a marker and circle some items on the board. We talked about the possibility of finding him a job that would let work outdoors, maybe at a state park – he wrote “park” on the board, which seemed to indicate he liked that idea! Again, it wasn’t a perfect system and looking back, I know we can do better by explaining various options more clearly, being more patient and having a more organized process.

Supporting someone like my brother to make decisions effectively requires some forethought and commitment on behalf of everyone involved in the meeting to “listen” to someone who has not yet figured out the best way to make himself “heard”. It’s my hope that we’ll continue to think creatively as a group about supporting Evan in these ways not only in formal planning meetings or doctor’s appointments or job visits, but in the small daily instances where he could be exercising more choice and control in his life.

Ensuring my brother’s ‘voice’ is heard

As family members, we have spent a lot of time speaking FOR Evan, because we have yet to truly figure out consistent ways to support him to “speak” or communicate for himself and decisions do have to be made in the meantime. I’m learning more and thinking more about how to make sure he feels involved and included in these conversations about his life, and that he truly knows we care about his voice and feelings first and foremost. I’m learning that modeling this for others in Evan’s life – family, friends, professionals and strangers alike - is powerful and makes a difference in the way that they hold conversations in front of him, and how they interact with him. I’ve observed that he seems more engaged and interested and willing to tolerate being at these planning meetings for long stretches of time when someone is doing this sort of support and accommodation for him.

Since learning about supported decision-making, I have grown even more committed to ensuring that Evan’s wishes, dreams and desires are the guidepost for all that happens in his life. It is critical for all of us to find ways to listen and support him in learning about options, so he can have as much control over his own life as possible. After all - this is what each of us wants and expects of our own life.