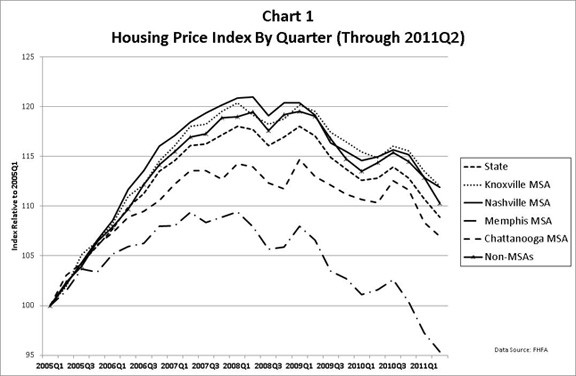 by Stanley Chervin, PhD and Harry A. Green, PhD

Twenty-four counties reappraised property in 2010, and 20 counties reappraised in 2011. These reappraisals were based, in most part, on property sales and prices during 2009 and 2010, respectively. The declines in residential market values since their peaks in 2008 and early 2009 (see Chart 1) are expected to have a clear negative impact on taxable assessments beginning with reappraisals in 2011 (based on sales during 2010) and thereafter.Falling property values do not affect assessments immediately. In fact, they may not affect assessments for several years because local governments in Tennessee do not reappraise taxable property every year, but rather every 4 to 6 years. Declines in taxable assessments will continue as long as property values continue to fall.

Housing price data in Chart 1 reflects price trends for the state and several metropolitan statistical areas (MSAs). There is no consistent index of housing prices for Tennessee counties, and data for the MSAs provide only general guidance on trends within each MSA. The Nashville MSA, for example, includes 13 counties, each of which is likely to have different housing price trends.

Tentative Evidence from Reappraisals in 2010 and 2011

Chart 1 helps explain the growth in assessments for the 24 counties that reappraised in 2010. Counties that last reappraised in 2004, 2005, and even 2006 continued to enjoy property value growth until values peaked in 2008. While all counties probably experienced declines in property values beginning in 2009, the market value of homes in 2009 (the basis for 2010 reappraisals) were, on average, still above values established in the previous reappraisals in 2004 (based on 2003 sales), 2005 (based on 2004 sales), and 2006 (based on 2005 sales). Thus while all counties may have experienced declines in property values since 2008, the gains in values in previous years for these counties appear to have been greater than the market value declines experienced more recently.

In contrast, reappraisals in 2011 show some clear evidence of the negative effect of the continuing decline in property values with several counties experiencing actual declines in total assessments following reappraisals.

The largest declines occurred in DeKalb, Meigs, and Sevier counties. While residential home values have declined in most counties, the effect on assessments has been greater in some than in others. The somewhat early negative effect of the recession on total assessments in 2 of these counties appears to be partly the result of 2 factors:

Reappraisals that result in a decline in total local assessments are unusual, given historically rising property values in conjunction with 4-to 6- year reappraisal cycles. Declines, when they do occur, will result in certified tax rates that are higher than previously levied tax rates, creating difficulties for local governing bodies that must deal with a decline in the tax base of their major tax source.

This procedure is generally known in Tennessee as the “truth-in-taxation” law.4

Table 3 reflects some trends that will likely be repeated as counties reappraise in the future. Declines in local assessments will automatically force or place great pressures on most counties (and cities) to raise nominal tax rates above those imposed in the previous year.5 As Table 3 shows, 3 of the 7 counties that experienced declines in total assessments increased their actual property tax rate to the certified tax rate (Meigs, Sevier, and Wilson), while the remaining four (DeKalb, Humphreys, Jackson, and Sequatchie) increased their property tax rate above the certified tax rate.6

Ten counties will reappraise in 2012 based on sale values for 2011 (see Table 4). Seven of these counties will be reappraising properties last reappraised based on sale values during 2006. While housing values in most locations continued to climb after 2006, values today (2011) for homes that existed in 2006, are on average at their 2006 levels. The implication for these 7 counties is that reappraisal values next year for properties last reappraised in 2006 will change little.

1Most of the report deals with the effect of declining residential values on current and future reappraisals. While industrial and commercial property values also affect the results of reappraisals on taxable assessments and tax rates, there are significantly fewer sales of such properties, and as a result, less available data with which to track changes in such property values.  Conversations with individuals who specialize in commercial and industrial properties suggest that their values have declined in tandem with housing values.

3Based on conversations with local tax authorities. Meigs County has also experienced recent development around Watts Bar Lake, but no definitive effect of such building and recent falling prices could be identified.

4For an expanded description of certified tax rates, go to http://www.comptroller.tn.gov/sboe/sbcert.asp.