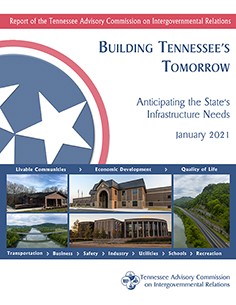 NASHVILLE—Tennessee needs at least $58.6 billion worth of public infrastructure improvements during the five-year period of July 2019 to June 2024—a $3.8 billion (6.9%) increase from the year before—according to a new report by the Tennessee Advisory Commission on Intergovernmental Relations (TACIR). Of the $3.8 billion increase in infrastructure needs reported in this year’s inventory, almost $3.0 billion (80.1%) is attributable to increases in the estimated cost for transportation and utilities, followed by general government (16.1%). Infrastructure needs for transportation and utilities, which increased for the fifth year in a row, increased this year by $3.0 billion mainly because of new road and sidewalk projects.

Information about funding for public infrastructure needs reported by officials indicates that 65.1% of the funds required to meet those needs was not available at the time the inventory was conducted, relatively unchanged from last year’s 67.0%. Excluding improvements needed at existing schools and those drawn from capital budget requests submitted by state agencies, neither of which includes funding information, only $15.5 billion in funding is available for the remaining $44.3 billion in needs.

The full report is available on TACIR’s web site at https://www.tn.gov/tacir/infrastructure/infrastructure-reports-/building-tennessee-s-tomorrow-2019-2024.html