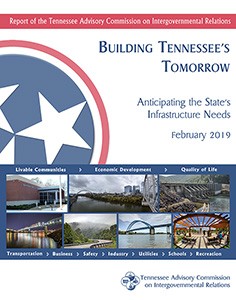 NASHVILLE—Tennessee needs at least $49.8 billion of public infrastructure improvements during the five-year period of July 2017 to June 2022—a $5 billion (11.1%) increase from the year before—according to a new report by the Tennessee Advisory Commission on Intergovernmental Relations (TACIR).  Improvements needed for Transportation and Utilities, Education, and Health, Safety, and Welfare infrastructure continue to account for most of the inventory, with Education and Transportation and Utilities infrastructure needs responsible for most of the reported increase this year.  More than two-thirds of the estimated cost of needed infrastructure improvements included in this year’s report is not funded, unchanged from last year.

Transportation and Utilities has always been the single largest category and remains so.  Estimated cost of needs in this category increased $1.2 billion (4.8%) from last year to a current total of $25.9 billion.  Most of this increase was caused by the $1.2 billion (5.0%) increase in the total estimated cost of transportation infrastructure needs.  This includes $2.8 billion in new projects (Improve Act accounts for $1.6 billion) and $1.0 billion in project cost increases (Improve Act accounts for $277 million).  But these increases are partially offset by $968 million in completed projects, $261 million in canceled projects, and $146 million for postponed projects no longer deemed necessary within this report’s five-year window.  Moreover, state and local officials reported $451 million in reduced costs for projects already in the inventory.  Projects totaling $851 million were removed from the inventory because improved methods of project tracking and quality control identified duplicates and invalid information.  The estimated cost for needed infrastructure improvements for other utilities decreased by $16 million (3.2%) and now totals $489 million.  In response to recommendations in the Commission’s 2017 report about broadband internet access and adoption, public infrastructure needed for broadband is now reported in the inventory as its own project type and now totals $19 million.

Education is the second largest category and increased $3.2 billion (30.8%) to $13.6 billion.  The cost of improvements needed for four of the five infrastructure types reported in the Education category increased this year.  The $2.2 billion (80.6%) increase in the need for improvements to existing schools, which itself is primarily attributable to a $2.0 billion increase reported for Metro Nashville Public Schools, is the main reasons the total estimated cost for education infrastructure increased.  This year, local officials reported they need $4.9 billion for improvements to existing public schools.  This includes $4.7 billion for renovations, $125 million for technology upgrades, and $91 million to address state and federal mandates.

The need for new schools and additions totals $3.6 billion, of which $3.0 billion is for new schools and $633 million is for additions.  Of the $3.0 billion total needed to build new schools, $972 million is for 24 new school projects added to the inventory this year by 12 school systems.  Of these 24 new school projects, almost half are needed in Rutherford and Wilson counties, which each need five new schools..  Some of the need for additions and improvements to existing space are caused by the condition of the school.  Although local school officials rated just under 10.7% of public schools (185) in Tennessee to be in fair or poor condition, 169 of those schools need improvements to existing space and account for 40.2% of the total estimated cost for improving existing space.

Information about funding for public infrastructure needs reported by officials indicates that 68.5% of the funds required to meet those needs was not available at the time the inventory was conducted, relatively unchanged from last year’s 68.9%.  Excluding improvements needed at existing schools and those drawn from capital budget requests submitted by state agencies, neither of which includes funding information, only $11.6 billion in funding is available for the remaining $37.0 billion in needs.

The full report is available on TACIR’s web site at https://www.tn.gov/tacir/infrastructure/infrastructure-reports-/building-tennessee-s-tomorrow-2017-2022.html