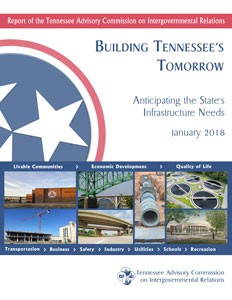 NASHVILLE—Tennessee needs at least $45 billion of public infrastructure improvements during the five-year period of July 2016 to June 2021—a $2 billion (4.7%) increase from the year before—according to a new report by the Tennessee Advisory Commission on Intergovernmental Relations (TACIR).  Improvements needed for Transportation and Utilities, Education, and Health, Safety, and Welfare infrastructure continue to account for most of the inventory, with Education and Health, Safety, and Welfare infrastructure needs responsible for most of the reported increase this year.  More than two-thirds of the estimated cost of needed infrastructure improvements included in this year’s report is not funded, a slight increase from last year.  Looking ahead, it is possible that the annual inventory on which TACIR’s report is based could assist local communities in obtaining federal funding under eligibility guidelines included in preliminary discussions of President Trump’s infrastructure plan.

Transportation and Utilities has always been the single largest category and remains so despite a small increase of $230 million (0.9%) from last year to a current total of $24.8 billion.  The net increase in the total estimated cost of transportation infrastructure needs is only $19 million (0.1%) in this year’s inventory.  The estimated cost for needed infrastructure improvements for other utilities increased by $200 million (65.7%) and now totals $504 million.  Most of this increase is attributable to the addition of a $153 million electrical transmission line replacement project by the Knoxville Utilities Board.

Education is the second largest category and increased $935 million (9.8%) to $10.4 billion.  The cost of improvements needed for each of the five infrastructure types reported in the Education category increased this year.  The $480 million (21.8%) increase in the need for improvements to existing schools and the $359 million (15.0%) increase in the need for new schools and additions are the main reasons the total estimated cost for education infrastructure increased.  This year, local officials reported they need $2.7 billion for improvements to existing public schools.  This includes $2.5 billion for renovations, $128 million for technology upgrades, and $93 million to address state and federal mandates.

Officials are confident in obtaining funding for only $10.9 billion of the $34.9 billion in infrastructure needs for which funding information is collected in the inventory.  Most of the available funding, $10.5 billion, is for improvements that are fully funded; another $393 million is for improvements that are partially funded.  That leaves another $24.1 billion of improvements for which funding is not yet available.  Funding information for needed improvements at existing schools and for needs reported in state agencies’ capital budget requests is not collected in the inventory.

The full report is available on TACIR’s web site.  For more information, contact Dave Keiser, Project Manager, at david.keiser@tn.gov or 615.253.4237.