“Col. Scates is a talented and experienced leader who will add valuable leadership experience from both his military and civilian careers,” said Maj. Gen. Jeff Holmes, Tennessee’s Adjutant General. “The Military Department is fortunate to have him on our command team.”

As the Assistant Adjutant General-Army, Scates will be responsible for more than 9,000 Tennessee National Guard Soldiers serving throughout the state. Prior to this appointment, he served as the director of joint operations for the Tennessee National Guard and as commander of the 194th Engineer Brigade headquartered in Jackson. Scates will be promoted to the rank of Brigadier General during a ceremony to be announced later.

To serve as the Assistant Adjutant General-Army, Scates was approved by a federal general officer recognition board, then confirmed by the U.S. Senate, and appointed by Tennessee Governor Bill Lee.

Scates started his military career in 1990 by enlisting in the Tennessee National Guard as a heavy equipment operator in the 913th Engineer Company. He then commissioned as an engineer officer in 1993 after attending the Tennessee National Guard’s Officer Candidate School. Over the next 30 years, Scates served in various command and staff positions to include commander of the 230th Engineer Battalion in Trenton and commander of the 194th Engineer Brigade in Jackson. He deployed to Iraq in 2004 and again in 2009. He also served in Kuwait in 2019. 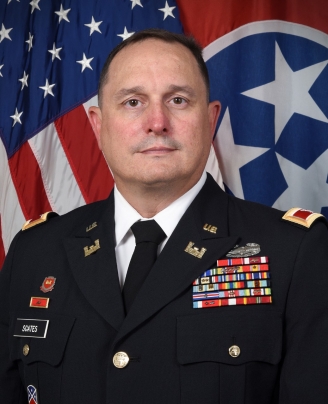