“Simmons has been a talented and trusted advisor since 2020, and he will be greatly missed,” said Maj. Gen. Jeff Holmes, Tennessee’s Adjutant General. “I wish him well on his much-deserved retirement. The Military Department is also proud to welcome Command Sgt. Major Crockett to our senior command team who is a tested combat veteran and a talented leader.”

As the Senior Enlisted Leader, Crockett will be responsible for advising the Adjutant General on all enlisted matters affecting training and utilization, health of the force, and professional development of the more than 14,000 Tennessee National Guard Soldiers and Airmen. Prior to this appointment, Crockett served as the State Command Sergeant Major for the Tennessee Army National Guard.

Crockett started his military career nearly 33 years ago when he enlisted in the Tennessee National Guard in June 1990 as a cavalry scout. He advanced through the ranks and was promoted to Sgt. 1st Class in 2001 while assigned to Troop C’s Detachment 1 with the 278th Armored Cavalry Regiment’s 1st Squadron. He served as a scout platoon sergeant and his Bradley Fighting Vehicle crew was recognized as the 278th’s “Top Gun” in 2003 before deploying to Iraq in 2004 as part of Operation Iraqi Freedom. 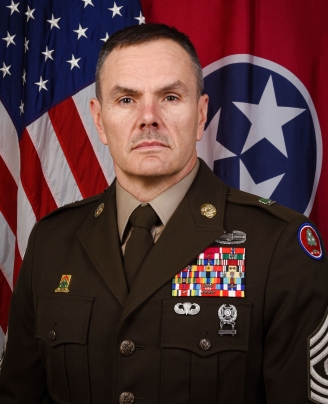