Brother and sister in arms: Humboldt siblings deployed together in Africa

DJIBOUTI – When it was announced that the Tennessee National Guard’s 268th Military Police Company, headquartered in Millington, were deploying to the Horn of Africa for a year starting in January 2022, Soldiers from across Tennessee eagerly volunteered to serve overseas with the 80-member company. Among those many volunteers were two siblings from Humboldt, Specialists Jacob and Mahala Perry.

Graduates of Alamo’s Crocket County High School, Jacob and Mahala saw the mission to the Horn of Africa as a chance to help others.

“I saw this as an opportunity to really do some good,” said Mahala. “And I had to be a part of it.”

So in the Fall of 2021, Jacob and Mahala requested to deploy with the Millington unit.

“I was the first to volunteer, and when I called my family to let them know what I was doing, the first thing my brother said was ‘can you get me on that list?’” said Mahala. “My mom was worried when I first told her, as most mothers do. But when she found out my brother was going too, she was a lot more comfortable with the idea of us going together.”

“I found out about the possible deployment while in Louisiana helping with hurricane damage with the National Guard,” said Mahala. “I knew deployments to Africa were uncommon, so I was like hey, why not! This would be my first overseas deployment and I was very excited to go especially knowing that my brother was with me.”

In late Fall, the Perry’s were selected for the 268th’s mission. After joining the unit and completing training in Millington, they flew to Fort Bliss, Texas, on Jan. 10, for more advanced training. A month later, they departed for Djibouti, Africa, with the 268th.

Jacob and Mahala are currently serving in Camp Lemonnier, Djibouti, as part of Combined Joint Task Force - Horn of Africa. Along with 80 other Tennesseans, their main responsibility is to secure and defend the Chabelley Airfield. They also oversee contractors while assisting the task force to promote security and dissuade conflict.

“Having my brother here with me half-way across the world makes being gone a lot easier,” said Mahala. “He’s part of home. With this being my first deployment, I wouldn’t have it any other way than to get to share some of these experiences with him. Especially since he’s the reason I joined in the first place. Family is very important to me.”

Jacob is a combat medic who joined the Tennessee National Guard right after graduating high school in 2016. During the deployment he is not only responsible for the physical well-being of the Soldiers in his unit, but also servicemembers in units like the 1-183th Cavalry, Air Force personnel, and contractors working on the airfield.

“I have always wanted to join the military,” said Jacob. “My family helped me decide on the Tennessee National Guard, and it was a great fit. I plan to become an Army flight medic and hopefully do a similar job in my civilian career.”

This is his second deployment. In 2018 he deployed to Ukraine with the 278th Armored Cavalry Regiment as a part of a Joint Multinational Training Group, which reinforced and improved the defensive skills of Ukrainian Armed Forces.

“Being deployed with my sister almost feels like I never left home,” said Jacob. “I don’t get to see her as much as you would think, but we make time to visit during meals and at company functions.”

Unfortunately, Jacob and Mahala often work at different times, so they don’t get to see each other as much as they like.

“It’s often hard to catch him,” said Mahala. “But when our mom sends mail with just one of our names, we make time to see each other. With Jacob being a medic, he likes to make rounds at each post to make sure everyone is doing well, and I get to see him then. I also see him in line for meals and try to eat together whenever possible.”

Mahala is a military policeman, and this is her first deployment with the National Guard. She graduated high school in 2018 where she was a competitive cheerleader who performed for football and basketball games.

Enlisting in the National Guard after completing a semester of college, she wanted to use the Guard’s educational benefits to help pay for school.

“My brother was on his first deployment and I knew all the benefits he had gotten through the National Guard,” said Mahala. “It looked like a great option. Our mother also raised us both with a sense of patriotism, so it was only natural for my brother to want to serve his country and I eventually felt the same way.”

Mahala is currently a full-time student with the University of Tennessee at Martin. Studying Forensic Science with a minor in Psychology, she hopes to get a job with the Tennessee Bureau of Investigation after graduating.

“My specialty as a military policeman is what helped me choose a degree in the Criminal Justice field,” said Mahala. “Before I decided on this career field, I was studying to become a physician’s assistant. I thought it was what I wanted to do with my life, but after going through training with the Guard, I knew what I really wanted to do.”

Mahala plans to serve for at least 20 years and retire from the Guard. “We have several family friends that served, either all the way through to retirement or just through their first contract,” she said. “All of them gave the same advice to retire with the Guard. Right now, I love being a military policeman, but there are other options out there that I may look into.”

Over the last few months being deployed with the 268th, Mahala says she has grown personally and professionally. “This opportunity has allowed me to step up and enhance my leadership skills,” said Mahala. “My job here requires me to brief several high-ranking members of the military in all branches of service, which helps my public speaking as well as my confidence.”

For the last five months, Jacob and Mahala have been working hard in Djibouti and are looking forward to coming home to Tennessee this December.

“This is the best job I've ever had,” said Jacob. “And the Guard is the greatest decision I've ever made.” 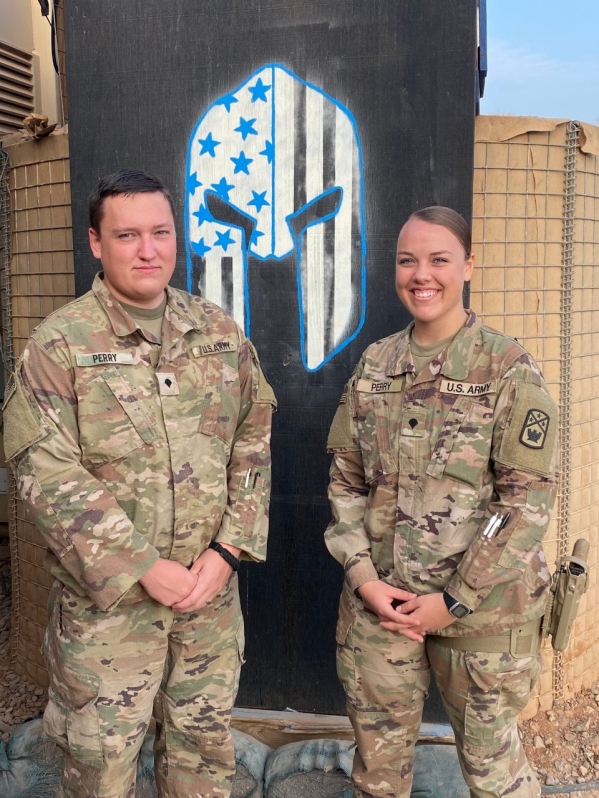 Specialists Jacob and Mahala Perry, from Humboldt, are currently deployed to the Horn of Africa and stationed at Chabelley Airfield, Djibouti, with the Tennessee National Guard’s 268th Military Police Company. The brother and sister team are competing a year-long deployment and are scheduled to return to the United States in December 2022. (submitted photo)