TULLAHOMA, Tenn. – Airmen and Soldiers from across Tennessee gathered at Tullahoma’s Volunteer Training Site from May 20-22, to compete against one another at the Tennessee National Guard’s annual Adjutant General Rifle Match.

Staff Sgt. Celia Riffey, a military police Soldier with the 252nd Military Police Company and native of Sevierville, became the first female in Tennessee history to ever place first in the event.

“I didn’t expect to win, but I’m happy with how it turned out,” said Riffey. “I’m pleased with how I performed this weekend. Any day you get to throw lead down range is a good day in the Tennessee National Guard.”

The three-day competition consisted of multiple graded events measuring the speed and accuracy of each marksman. On day three, as the competition concluded, scores were tallied, and Riffey was declared the overall top marksman. This weekend’s match focused on rifle proficiency while the pistol competition will take place in August 2022.

The event is an annual marksmanship competition hosted by the Tennessee National Guard’s Combat Marksmanship Program. Its mission is to promote marksmanship training throughout the force statewide. Competitors are experts in their field and will take those valuable skills back to their units.

“We were pleased with the number of new competitors this weekend,” said Master Sgt. Michael Brumer, Tennessee State Marksmanship Coordinator. “It says a lot about the efficiency of the program. Our goal each year is to get new Guardsmen introduced to the program. The more people we have coming to these events, the more knowledge will be spread throughout our ranks, promoting lethality and readiness within our units.”

Riffey, who has been serving in the Guard for over 11 years, is excited to share gained knowledge on marksmanship with her fellow Soldiers.

“I do a lot of hunting and I’m comfortable with a rifle, but I was able to learn a lot this weekend,” said Riffey. “I like to teach, and I want my unit members to be as proficient as possible, so I’m looking forward to continue to work with them so we can be a better unit.”

Riffey’s team, which included three additional members of the 252nd, came in second place in the overall team competition. A team from the 1-171st Aviation Regiment came in first place, and a team from the Tennessee Air National Guard’s 118th Wing took third. 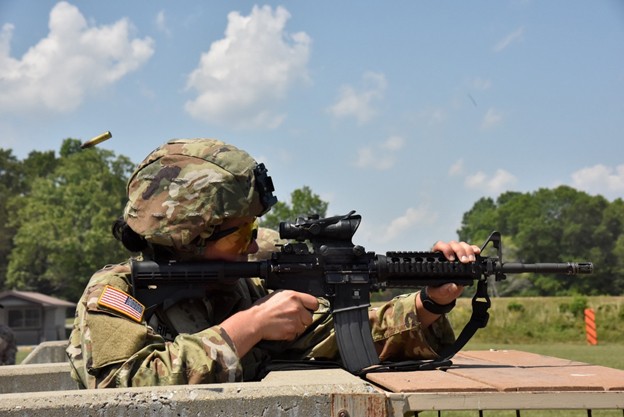 Staff Sgt. Celia Riffey, from the Tennessee National Guard’s 252nd Military Police Company, was the top overall marksman at the annual Adjutant General Match, which took place at Tullahoma’s Volunteer Training Site, from May 20-22. The TAG Match is a marksmanship competition and training event to promote shooting proficiency throughout the ranks of the Tennessee National Guard. (photo by Sgt. 1st Class Timothy Cordeiro) 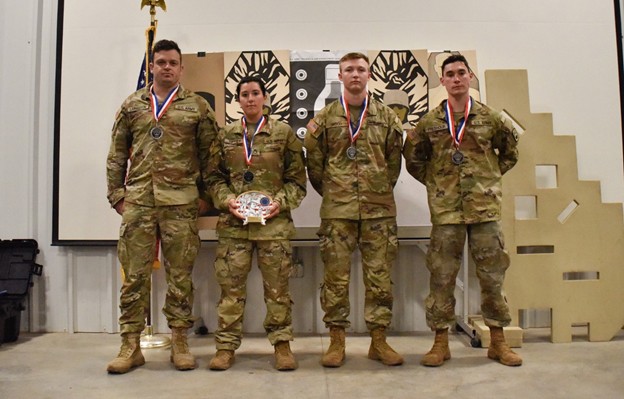 Staff Sgt. Celia Riffey poses with her teammates from the 252nd Military Police Company after they came in second place at the annual Adjutant General Match, which took place at Tullahoma’s Volunteer Training Site, from May 20-22. The TAG Match is a marksmanship competition and training event to promote shooting proficiency throughout the ranks of the Tennessee National Guard. (photo by Sgt. 1st Class Timothy Cordeiro)