Held at Smyrna’s Volunteer Training Site, each Soldier received their commissions as federally recognized officers in the Tennessee National Guard and promoted to the rank of Second Lieutenant.

To become an officer, each Soldier either attended an 18-month hybrid-training program in Smyrna and Fort McClellan, Alabama, or an accelerated course at Fort McClellan. While training, the candidates were tested mentally, physically, and placed in high-stress situations to teach them how to be combat leaders.

Maj. Michael Grant, the OCS Commander, administered the Oath of Office and expressed what it meant to be a part of training the new officers.

“It is a great honor to work with the most professional and competent officers and noncommissioned officers in the National Guard,” said Grant. “It has been a privilege to evaluate, train, and develop future leaders of the Army.”

“You’ll be responsible for everything good or bad your subordinates do, but your new task will be to give them vision and purpose,” said Holmes. “Our Soldiers are driven by that purpose. You’re no longer one of them, but their leader.”

Jerimiah Borrajo, a Bethpage native, was announced as the class Distinguished Honor Graduate and recipient of the Erikson Trophy. He was also awarded an Army Commendation Medal for his leadership, academic, and physical performance throughout the class.

“OCS has been an arduous journey that has taught me more about myself and being a better leader,” said Borrajo. “The Tennessee Army National Guard will be receiving 17 of the finest Officers ready to take on any challenge.”

Each candidates’ family were given the honor to pin on their graduate’s rank, signifying their status as a second lieutenant. Following that, they then conducted the time-honored tradition of the Silver Dollar Salute where the newly commissioned second lieutenant presents a silver dollar to the first enlisted Soldier who salutes them.

The new 17 commissioned officers will now lead Soldiers in the Tennessee Army National Guard as they join the more than 2,000 other Tennessee Officer Candidate Graduates who went before them. 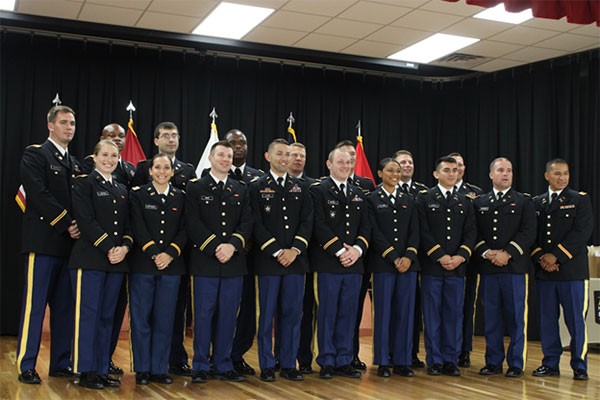