More than 500 Soldiers with the 230th are providing direct support to the 278th’s 3,000 combat troops by providing fuel, food, ice, water, logistical support, and vehicle maintenance.

“Every section has been strong during their time here at XCTC,” said Command Sgt. Maj. Richard Seber, command sergeant major of the 230th Sustainment Brigade. “It’s like Bill Belechek says, everyone just has to do their job.”

According to Col. Christopher Patterson, commander of the 230th, the brigade is able to accomplish multiple tasks with several units by directing effort and managing workflow.

“With each major exercise, the mission and players change,” said Patterson. “What does not change is the doctrine and the utilization of Standard Operating Procedures. It is critical that you exercise them, refresh them, and teach new Soldiers how to do those core functions in the SOPs. This is a great opportunity for those in the field to exercise those tasks and ensure that new Soldiers know them.”

“I have learned a lot,” said Starling. “I’ve learned that it’s not all theory. When you leave the schoolhouse it’s ‘if you do this it should work,’ when in reality sometimes you have to do a little extra or think outside the box.”

A Soldier from the 230th Sustainment Brigade chains down an M3 Bradley Fighting Vehicle during railhead operations at Fort Hood, Texas, as they support the 278th Armored Cavalry Regiment conducting an eXportable Combat Training Capability exercise throughout the month of July. (Photo by Pfc. Everett Babbitt) 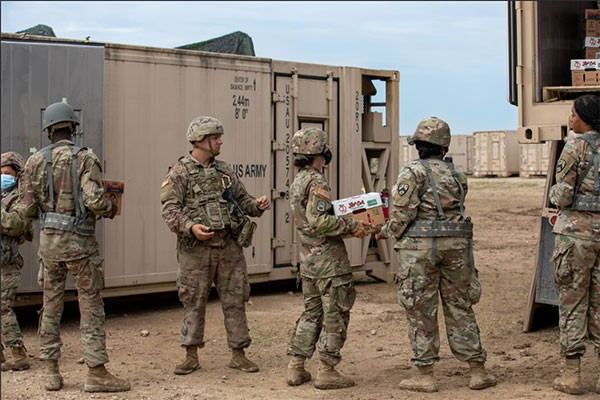 Soldiers from the 230th Sustainment Brigade work together to organize critical supplies required to support all Tennessee Guardsmen in Fort Hood, Texas, as they conduct an eXportable Combat Training Capability exercise throughout the month of July. (Photo by Pfc. Everett Babbitt)