MEMPHIS, Tenn. – Members of the Tennessee General Assembly visited the Tennessee Air National Guard’s 164th Airlift Wing for a base tour called “Get to Know Your Guard” on April 16, in Memphis. The goal of the tour was to foster awareness and strengthen relationships among community leaders as a community-based force.

The tour provided unit history insights, explained current missions, and offered a Q&A forum that made this an informative and memorable event. State Senators and Representatives toured a C-17 aircraft and various buildings and facilities throughout the base.

“It is an honor to host our State Representatives who serve the citizens of Tennessee and the local area,” said Col. Matthew Brancato, Wing Commander, 164th Airlift Wing. “Today’s tour was an opportunity to thank our State Legislature for their support and provide more details about our state and federal missions.”

There are more than 950 Airmen in the Tennessee Air National Guard’s 164th Airlift Wing serving the state of Tennessee and around the globe.

“We are always looking for ways to integrate with the local community since our Air National Guard members work and serve alongside the citizens of Tennessee,” said Brancato. “We strive to represent the local community when we’re flying missions around the U.S. and the world, so our relationships with our elected officials is critical.”

The Tennessee National Guard plays a vital role in the defense of our nation and in support of emergency response operations in Tennessee.

Aircrew members of the 164th Airlift Wing share C-17 capabilities and mission readiness as elected officials ask questions during a “Get to Know Your Guard” tour in Memphis, April 16. (Photo by: Airman 1st Class Travonna Hawkins) 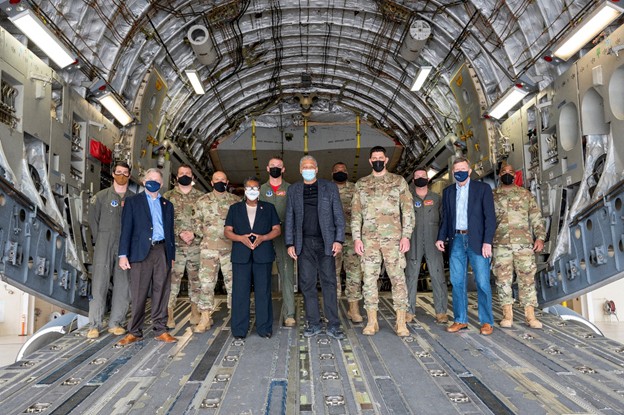 Members of Tennessee Air National Guard and elected officials pose for a photo on the back ramp of a C-17 during a “Get to Know Your Guard” tour in Memphis, April 16. (Photo by: Airman 1st Class Travonna Hawkins)