A Family Tradition of Service and BBQ

NASHVILLE, Tenn. – Tennessee, known as the Volunteer State, has an incredible history of answering our Nation’s call. Since 1796, Tennesseans have filled the ranks of every service branch and made notable contributions in defense of our country. Tennessee is also known for great food – particularly BBQ. For one Tennessee family, military service and great BBQ go hand-in-hand.

Col. Bradley Ball, a native of Memphis who serves as Staff Judge Advocate of the Tennessee Air National Guard, started cooking BBQ with his father at a very young age.

“We prioritize good food in my family, and my dad had several grilling recipes that were pretty awesome,” said Bradley Ball. “I learned my love of BBQ from him.”

Years later, his son, Staff Sgt. Christian Ball, had a budding interest in BBQ and began learning the art of BBQ and participating in cook-offs. Christian Ball, who serves in the 118th Wing, wanted to build on that experience. Last spring, father and son made the decision to form a competition BBQ team.

In May 2021, the Balls had their first team competition in Panama City, Florida. With military precision and excellence, they won the competition and crowned “Grand Champions.” Bradley Ball added, “We’ve competed in two additional BBQ competitions since then – with more humbling results.”

Their success in competitive BBQ gave them an idea. Bradley and Christian Ball combined their shared passion for service and BBQ by orchestrating the first “BBQ Salute” to celebrate military families over Labor Day weekend as part of the Smithfield Classic BBQ Contest at Nissan Stadium in September. Over 300 service members and their families were treated to BBQ prepared by professionals from all over the country. In addition, 50 members of the 118th Wing were treated to a two-hour “Pitmaster Academy” where they learned tips and tricks from championship pitmaster Ben Wilson.

The initiative was so successful that celebrities like Guy Fieri took notice. Fieri told the Balls he was interested in supporting future events. Currently, the team is in discussions to cook and host an inter-service BBQ competition as part of the pregame festivities at this year’s Armed Forces Bowl in Fort Worth, Texas. 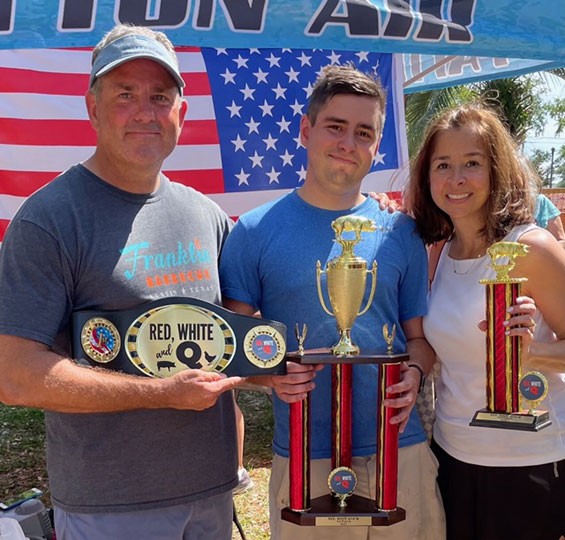