“Maj. Gen. Baker has a long and accomplished career with the Tennessee National Guard and it was an honor to get to the opportunity to promote an officer as deserving as him,” said Maj. Gen. Terry “Max” Haston, Tennessee’s Adjutant General. “He is a gifted leader and an invaluable member of my team.”

Following the pinning, Baker thanked everyone for their support, especially him family. “I would never be here and able to continue serving my state and country without the support of my wife and children,” said Baker. “Their sacrifices, and the sacrifices of all Soldier’s families, are what allows us to keep doing what we love.”

Baker has had a long career serving the State of Tennessee. He enlisted in the Tennessee National Guard on December 17, 1980, as a Calvary Scout at Troop B, 230th Calvary in Huntingdon, where he served as an enlisted Soldier until June 1984. Upon receiving his commission from the Tennessee Military Academy in 1985, Baker served as a Cavalry and Armor Platoon Leader and Commander, a Maintenance and Logistics Officer, and in various other commands and staff assignments within the Tennessee Army National Guard. Before becoming the Assistant Adjutant General-Army, Baker served as the J-4, Director of Logistics, responsible for the logistics and maintenance operations of the entire Tennessee Army National Guard.

Baker deployed to Kuwait in 2004 as part of Operation Iraqi Freedom III with the 230th Area Support Group, serving as the Theater Combat Service Support Automation Management Officer, and again in 2008 as the Commander of the 30th Combat Sustainment Support Battalion at Q-West, Iraq. 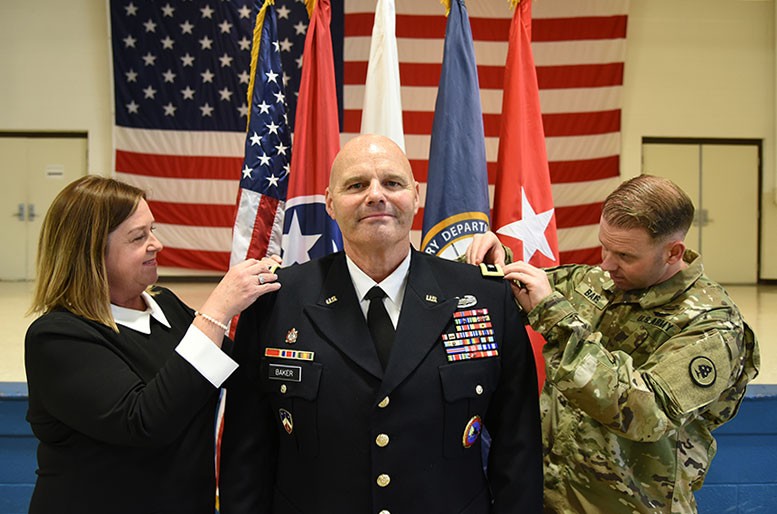 Photo: Maj. Gen. Tommy Baker is pinned with his new rank by his wife Camille and his son, 1st Lieut. Cody Baker, during his promotion Ceremony at the Tennessee National Guard headquarters on November 9, 2018. (U.S. Army photograph by Sgt. 1st Class Edgar Castro)