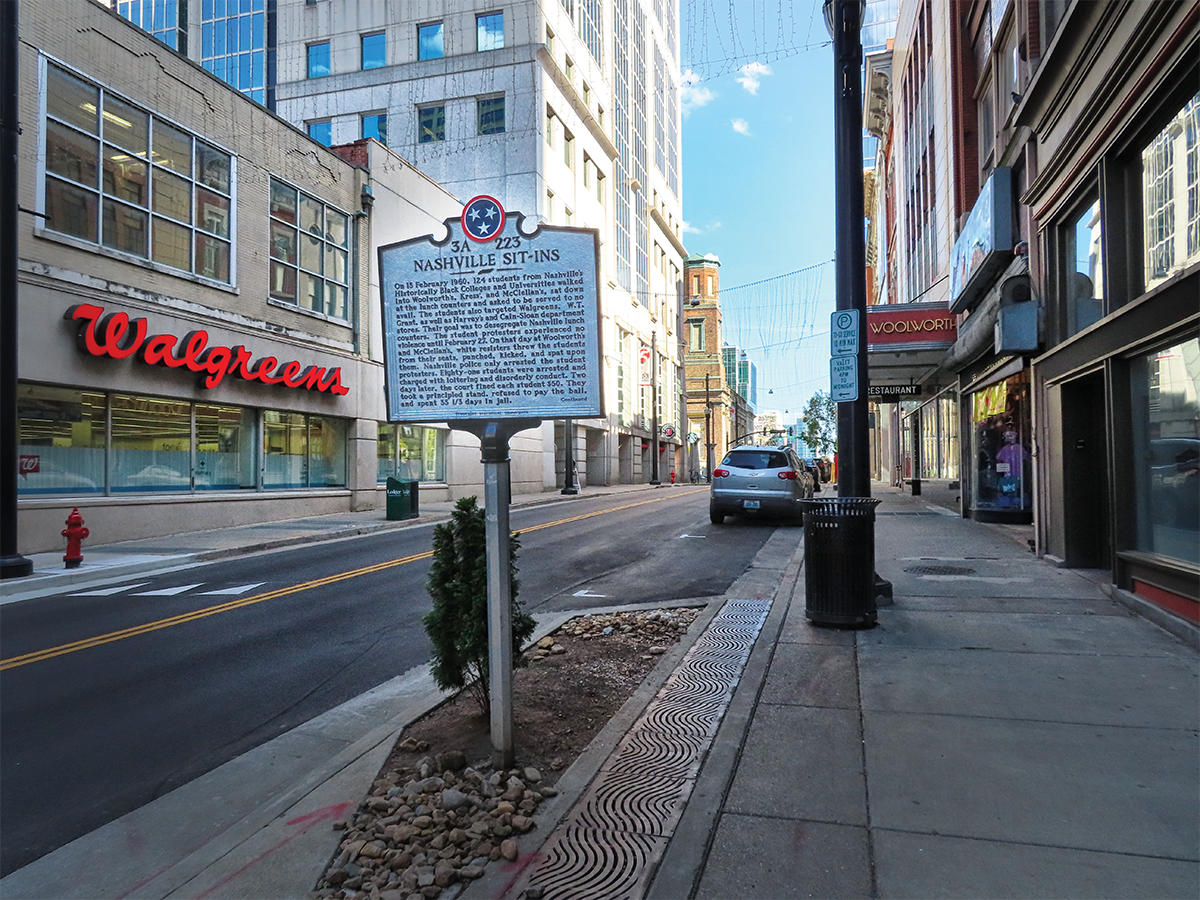 In 1960 Nashville’s African American community and the city in general experienced events that changed the timbre of race relations in the Athens of the South. In many ways Nashville and its contributions to the overall narrative of the Civil Rights Movement are barely recognized. Although a coterie of Nashville student leaders, whose fearless resolve, allowed them to travel throughout the South and waged war on racial discrimination, with the exception of a few are scarcely mentioned in the Modern Civil Rights storyline. Their seeds of courage, faith, determination, and resolve, were planted, watered, and nourished in the ethos of the nonviolent-direct protest classes they attended at Clark Memorial United Church where the seeds of revolution were planted under the master gardener and planter the Reverend James Lawson, Jr., a graduate student at Vanderbilt’s School of Divinity, who came to Nashville at the urging of the Reverend Dr. Martin Luther King, Jr. In the dorm rooms of the city’s Historically Black Colleges and Universities (HBCUs) and the Nashville Student Movement Office on 21st Avenue North and Jefferson Street, students at American Baptist Theological Seminary (now American Baptist College), Fisk University, Meharry Medical College, and Tennessee Agricultural & Industrial State University (now Tennessee State University) were leaders in challenging racial segregation at its core and helped construct the foundation of the freedom movement.

From staging some of the modern movement’s earliest sit-ins, to helping to organized the Student Nonviolent Coordinating Committee (SNCC), to continuing the Freedom Rides, to participating in voter registration drives, to the March on Washington for Jobs and Freedom, to the Selma-to-Montgomery March for voting rights, Nashville student activists participated and in many cases were in the forefront as leaders. Nashville students met weekly during the months of September, October, and November of 1959. During those months, Lawson introduce the student activists to the philosophy of Jesus Christ, Mohandas Karamchand Gandhi, and Henry David Thoreau, among others. Lawson and others, the Reverend C. T. Vivian among them, gave the students a view of nonviolence by mixing role-playing of various types including experiencing violence that may have been perpetrated upon them. As Diane Nash, one of the student leaders noted, one of the movement’s goals was to “be respectful of the opposition and try to keep issues geared towards desegregation, not get sidetracked.”  Although Nashville student activists conducted “test sit-ins” in November and December of 1959 to confirm the city’s exclusionary racial policy, which if proven true, planned to execute Nashville’s sit-in movement beginning in early 1960. However, before they could carry out their plans, four students, all men, sat-in at Woolworth’s in Greensboro, North Carolina, on February 1, 1960. Later, the North Carolina A & T students were joined by others, including the women at Bennett College. The sit-in in North Carolina, strengthened the determination and steadfastness of the already organized Nashville students.  Two weeks later, on February 13, 1960, Nashville students launched their sit-in movement, when they gathered at Kress, Woolworth’s, and McClellan stores at 12:40 p.m. in downtown Nashville. After making their purchases at the stores, the students sat-in at the lunch counters.  Store owners initially refused to serve the students and closed the counters, claiming it was their “moral right” to determine whom they would or would not serve. The students continued the sit-ins over the next three months, expanding their targets to include lunch counters at the Greyhound and Trailways bus terminals, W. T. Grant’s, Walgreen’s Drugstore, and major Nashville department stores, Cain-Sloan and Harvey’s. Although the early sit-in protesters experienced no violence that changed during the third protest of eating facilities in February.

The first violent response to the protests came on February 27, 1960, which Lawson called “big Saturday.” The protesters that day were attacked by whites opposed to racial desegregation. The police arrested eighty-one protesters, but not one of the attackers faced arrest by law enforcement. The arrested students were found guilty of disorderly conduct. However, they all refused to pay fines and remained incarcerated as a continuation of their protest. “We feel that if we pay these fines we would be contributing to, and supporting, the injustice and immoral practices that have been performed in the arrest and conviction of the defendants. The first phase of the Nashville Sit-in Movement continued until a resolution came to the forefront on May 10, 1960.  However, the resolution was wrought by the April bombing of Attorney Z. Alexander Looby’s home.

In the Civil Rights Movement of the World War II era, Looby rose to a position of local leadership. After losing a 1940 runoff election to a white opponent in a city council race, from 1943 to 1945 he presided over the James C. Napier Bar Association. In 1946 the National Association for the Advancement of Colored People hired Looby, Maurice Weaver, and Thurgood Marshall to represent the African Americans charged with murder following the recent race riot in Columbia, Tennessee. Looby’s legal defense helped acquit twenty-three of the defendants. He crisscrossed the state in the company of other black lawyers, arguing against Jim Crow and discrimination. Looby is credited with desegregating the Nashville airport dining room and the city’s public golf courses. Politics, he thought was a means by which an oppressive racial system could be changed.  In 1951 he and fellow attorney Robert E. Lillard became the first African Americans elected to the city council since 1911. During the sit-in demonstrations and civil rights marches of the 1960s, Looby, one of thirteen black attorneys provided money and legal services for local college students arrested and jailed. On April 19, 1960, his Meharry Boulevard home was destroyed by dynamite. This refusal of African Americans to participate in the Easter shopping season successfully caused businesses to experienced unprecedented commercial losses.

The bombing of Looby’s home caused a definitive moment for Nashville’s Civil Rights Movement. It served as the catalyst for a silent march later that day when a diverse group of 3,000 people marched to City Hall where Mayor Ben West met them on the steps of the plaza. After questioning by Nash and Vivian, West stated that lunch counters should be desegregated. A watershed moment, this admission by West paved the way for the beginning of desegregated lunch counters making Nashville the first southern city to do so. Nashville student activists answered Ella Josephine Baker’s (1903-1986) call for students conducting sit-ins to come to Shaw University, a HBCU in Raleigh, North Carolina.

As regional desegregation sit-ins led by African American college students, Baker persuaded the SCLC to invite southern university students to the South-wide Youth Leadership Conference at Shaw University on Easter weekend in 1960. This was a gathering of sit-in leaders to meet, assess their struggles, and explore the possibilities for future actions. At this meeting the Student Nonviolent Coordinating Committee (SNCC) was formed. Baker saw the potential for a special type of leadership by the young sit-in leaders, who were not yet prominent in the movement. She believed they could revitalize the Black Freedom Movement and take it in a new direction. Baker brought the sit-in participants together in a way that sustained the momentum of their actions, taught them the necessary skills, provided the needed resources, and aided the students in amalgamating into a more activist and autonomous organization. To this end she worked to keep the students independent of the older, church-based leadership. In her address at Shaw, Baker also known as “Fundi”, which comes from the Swahili word meaning a person who teaches a craft to the next generation, warned the activists to be wary of “leader-centered orientation.” While many of the student activists thought Nashville Student Movement leader Diane Nash would be elected as the first president of SNCC, it was her fellow student and colleague at Fisk University, Marion Berry who became the organization’s first president. “Diane was a devoted leader . . . but she was the wrong sex,” said John Lewis. “There was a desire to emphasize and showcase black manhood.”

SNCC aided in the coordination of sit-ins and other acts of nonviolent civil disobedience throughout the South. In the fall of 1961, following the United States Supreme Court decision in the Boynton v. Virginia, 364 U.S. 454 (1960) ending racial segregation of public transportation and eating facilities within those locations, SNCC members confronted violent opposition as Freedom Riders on buses that carried integrated groups of passengers from Washington, D.C., and Nashville through the Carolinas, Georgia, Alabama, and Mississippi. The first group of Freedom Riders, sponsored by the Congress Of Racial Equality (CORE) and traveling in two groups on Trailways and Greyhound buses, met unmerciful violence and CORE abandoned the rides. The Nashville Student Movement under the direction of Nash and others decided that “we can’t let violence overcome nonviolence. We are coming into Birmingham to continue the Freedom Ride.” Knowing the risk that they all were under Nash stated, “… some of the [people I loved the most] might not be alive the next night.”  Members of the Nashville Student Movement left Nashville on May 17 for Birmingham. Upon their arrival, Theophilus Eugene “Bull” Conner, city commissioner of public safety, ordered the new group of Freedom Riders taken to jail. The Riders were released the following day at the Alabama state line. Three days later, despite the governor’s pledge of protection, approximately three hundred white segregationists attacked the new group of Freedom Riders, which included thirteen students from Tennessee A&I State University, four from American Baptist College, two each from Fisk University and George Peabody College, and one student from Atlanta’s Spelman College, as well as John Seigenthaler, the US Justice Department representative of the Kennedy administration, as they pulled into at a bus depot in Montgomery. The Riders remained indomitable and started out again four days after the Alabama assault. When the Riders arrived in Jackson, Mississippi, no fanatical white mobs awaited them. However, as they entered the whites-only waiting room, police immediately steered them into a paddy wagon and whisked them away to jail. On September 22, 1961, in response to the Freedom Rides and under pressure from Attorney General Robert Kennedy and others in the Kennedy administration, the Interstate Commerce Commission (ICC) promulgated regulations prohibiting racial segregation in train and bus terminals, effective on November 1, 1961. Nashville student activists continued to toil in the civil rights vineyard fighting for all to be treated with dignity and the rights as articulated in America’s governing documents.

Lest you forget, the 60th Anniversary of the Nashville Sit-in Movement, the bombing of Z. Alexander Looby’s home, the silent march in protest against white supremacists, which was suggested by the Rev. Cordy Tindell (C.T.) Vivian,  who was familiar with New York’s silent march against lynching in the early 1900s, the desegregation of Nashville lunch counters and other public accommodations, the founding of the Student Nonviolent Coordinating Committee and the Freedom Rides, remember Nashville activists also played key roles in the 1963 March on Washington, the Birmingham campaign of 1963, were frontline leaders during the Mississippi Freedom Summer of 1964, and the struggle to gain voting rights in Selma, all events at the apogee of the modern struggle for  civil and human rights. As the late historian and Fisk University alumnus John Hope Franklin said of them, they were “probably the most courageous and the most selfless” civil rights workers.

Like those of the Modern Civil Rights Movement (a movement that took place during the last half of the 20th century that focused on inequalities and injustices structurally institutionalized against the African American population), other groups followed their model to gain rights denied them because of gender, age, ethnicity, and others in the 21st century denied justice and equality. Discerning the nexuses between past and present is undeniably fundamental for a constructive comprehension of the condition of being human. The wide-ranging span of the human experience, viewed both in depth and protensively over time, is the focus of history as a field of study. That is why the discipline of history matters. It is not just valuable, it is fundamental. 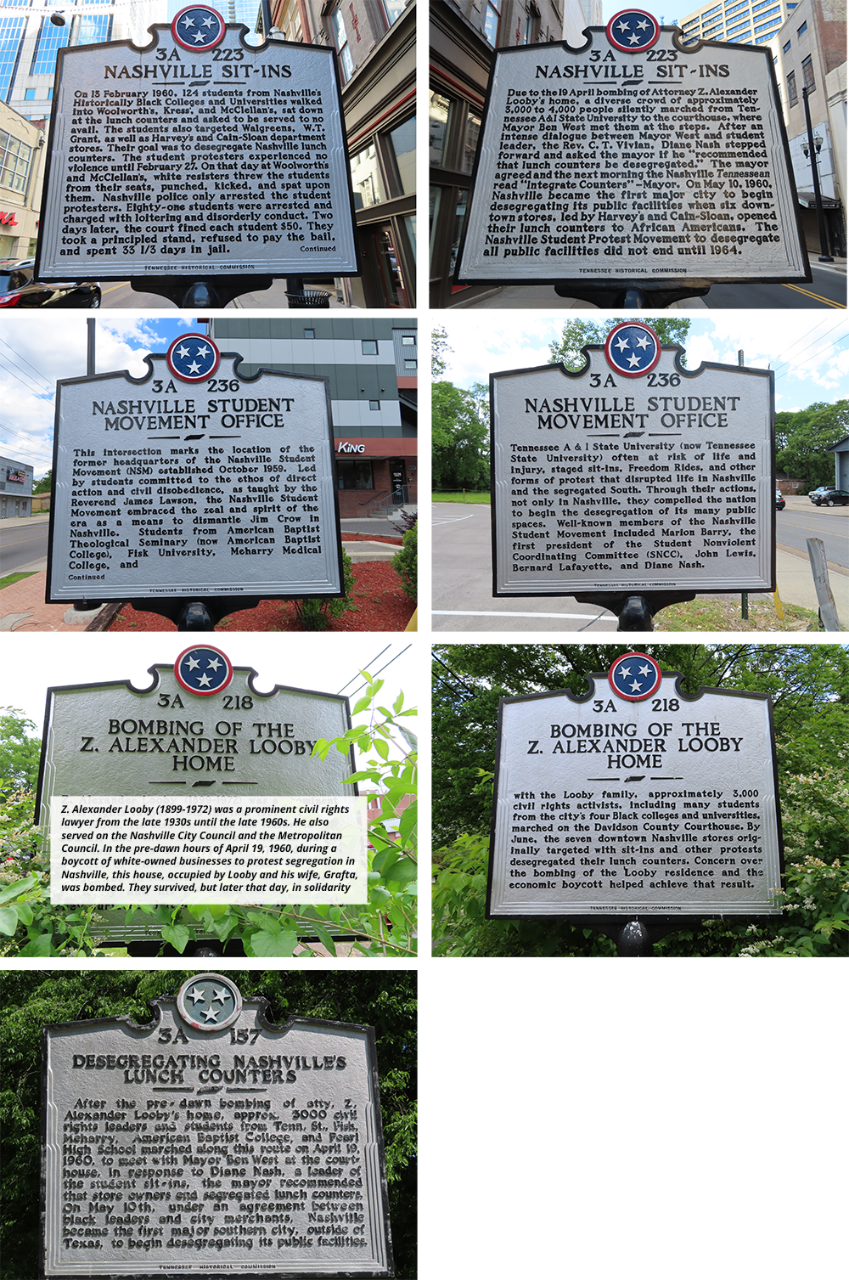