Two out of three Tennesseans live in an urban area.  Urban areas are locations with high population density.  Urban areas are in cities and towns.  An urban area is often the main area of employment.  Urban areas have the most human-built structures.  This built environment creates opportunities for health such as sidewalks and public transit.  The built environment also creates challenges to health such as sedentary commuting and air quality.  Many urban areas and their nearby communities that are socio-economically connected are grouped together into metropolitan areas. 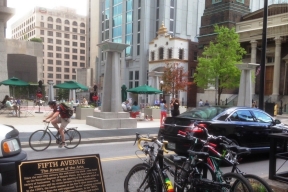 What does urban mean?

Urban areas are our cities and towns.  Urban areas encompass residential, commercial and other land uses.  The U.S. Census Bureau designates areas of 2,500 to 50,000 people as Urban Clusters and areas of 50,000 or more people as Urbanized Areas.  More Tennesseans live in communities designated as urban areas compared to rural areas.

Urban areas may be the easiest places to build with health in mind.  Places in urban areas are simply closer together making walking, biking or transit riding choices easier to include as part of routine movement.  Connecting places together in convenient and safe ways increases opportunities for active transportation.  Residents of urban communities often enjoy greater access to healthier food stores and fitness centers.  Urban areas often enjoy a variety of opportunities for physical activity like:

What is different about health in urban communities?

Health is greatly influenced by place.  Environmental and cultural factors unique to an area influence behaviors and health.  People living in rural, suburban and urban areas have different levels of access to nutritious food, spaces for physical activity and recreation, utilities such as water and sewer, health care, dental care, transportation and even digital telecommunications.

Urban living can offer health benefits such as:

What are social determinants of health?

According to the CDC, conditions in the places where people live, learn, work and play affect a wide range of health risks and outcomes.  Evidence has emerged that there are number of social factors surrounding socioeconomic status that are important predictors of health.  Some of these social determinants of health are:

What health disparities are more common in urban areas?

According to the CDC, health disparities are preventable differences in the burden of disease, injury, violence or opportunities to achieve optimal health that are experienced by socially disadvantaged populations.  Health disparities can arise from environmental factors such as limited access to health care and other services, poor water or air quality, substandard housing and unsafe neighborhoods.  Health disparities may be related to poverty arising from lack of education or employment opportunities. Certain disparities exist for different genders, ages, races and cultural backgrounds, and also for behavioral factors such as tobacco use, substance abuse and unprotected sex.  Several disparities have been identified among people who live in urban areas include racial segregation and concentrated poverty.  Poverty can lead to higher medical costs and reduce the potential to work and earn.  In communities with low socioeconomic status there are can be higher rates of unintended pregnancy, STDs, depression, obesity and suicide.  In families experiencing poverty, adolescents are more likely to drop out of school.  People are more likely to suffer health problems like depression, asthma, heart disease and diabetes.  Persons of lower socioeconomic status are less likely to be able to afford leisure time fitness activities or have adequate health insurance.

The term “inner city” has been used to describe some urban environments where poverty is concentrated.  These areas of populations of lower socioeconomic status are more common in urban areas where properties may not be as well maintained and property values lower.  It is common for groups of similar people to live near each other.  Urban areas often see minority, transient or undocumented immigrant populations living together.  This can lead to health disparities within these marginalized populations.

What about urban housing?

Housing conditions shape the lives of families.  In some urban areas, housing, especially affordable housing, can be limited.  Some communities have incentives for developers to include affordable housing units in their projects while other communities are working on zoning policies that promote affordable housing.  The Tennessee Housing Development Agency may know of programs that could help housing improvement in your area.

As urban communities are densely populated, neighborhoods can change quickly over short distances.  Urban areas that are neglected can be places that negatively influence health and healthy behaviors.

Sometimes disadvantaged groups, such as minority and low-income households, concentrate in inner-city urban areas.  The term inner city has a negative connotation.  New efforts are being made in urban areas to provide government-assisted housing without an inner city stigma.  One effective change has been to not build stout, dormitory-like housing; rather to build government housing that resembles the other homes and buildings in a neighborhood.  Some government housing is using a new concept of selling some units and renting others.  This mix better maintains the neighborhood as the invested homeowners will not put up with disruptive renters that might reduce their property value.  Some local governments are even building their income-based housing in the same neighborhoods where private developers are building.  In other places, a certain percentage of new development is being set aside for affordable housing.  Multifamily housing also benefits from smoke-free policy, energy efficiency, green space and transit stops.

What is urban revitalization?

Neighborhood revitalization is a process of rebuilding neighborhoods to create new opportunities.  Revitalization creates opportunities for not only residential housing options but also for planning, beautification, entrepreneurship, business development, transportation and public spaces.  It is the opinion of many people that revitalized neighborhoods help cities and towns grow into places people want to live, work, learn and play.

At this time there is an increased demand for housing that is smaller than traditional family houses and neighborhoods connected to lots of things.  Both young and old are creating this demand which is leading to urban renewal of housing and neighborhoods within old, neglected or undeveloped parts of cities and towns.

Millennials are entering the workforce and neighborhoods in big numbers.  Most millennials use multiple ways of getting around.  These younger people are more interested in smart phones and social media than driving.  Millennials are credited with being flexible and picking the most practical mode of transportation to get around.

At the same time the baby boomer generation is aging.  Older people want to age in place within the same neighborhood where they lived, worked and raised a family.  Options are needed by older people who may not want to or not longer able to drive.

Whether they cannot afford a car or do not want to own a car, some people simply cannot or choose not to drive.  For these people multimodal transportation is a critical need.

Why is multimodal transportation important?

What is different about environmental conditions?

Environmental conditions can suffer in urban areas.  Because of vehicular tailpipe and other emissions, outdoor air quality tends to be worse in urban areas.  For example, if temperatures rise and wind and rain are minimal, ground level ozone or particulate matter can build up to unsafe levels.  Sometimes an air quality alert is issued to remind everyone to be careful exercising and to protect sensitive individuals who may already have breathing difficulties.

In many urban areas drinking water quality is high as municipal water utilities provide safe drinking water.  Outdoor water quality may suffer though as petroleum products, litter and other chemicals wash off all of the pavement and into lakes, rivers and streams.  With all of the streets, parking lots and other paved surfaces in urban areas, heavy rainfall can lead to localized flooding.  Storm water management continues to be an important topic to urban planners, especially with the increased frequency of extreme weather events connected with climate change.

Where are Tennessee’s urban communities?

Tennessee’s urban communities are diverse.  Each area has different population demographics and culture.  For example, Eastern Tennessee shares the rich history and culture of the Appalachian Mountain region.  Johnson City, Bristol and Kingsport share the moniker of the TriCities.  The Knoxville metropolitan area spreads its urban influence out into the suburbs over county borders.  South central Tennessee has a rich history connected to the Tennessee River flowing through Chattanooga and its industrial past.  Now the river brings a steady stream of tourists to enjoy the natural beauty of the area.  Middle Tennessee has witnessed the most growth, and the greater Nashville metropolitan area is the most populated in the state.  With Murfreesboro, Franklin, Hendersonville, Smyrna, Brentwood and other communities are steadily growing above the national average.  In northern Middle Tennessee, Clarksville is the proud home of the Ft. Campbell military base.  In West Tennessee the mighty Mississippi roars and Memphis sings the Blues as our largest population city.  Bartlett, Collierville and Germantown are popular suburbs on the east side of Memphis.  The urban areas with a population of greater than 50,000 are listed here:

Who does planning in my area?

What about economic development?

The Department of Economic and Community Development has several programs supporting quality of life improvements in communities such as Community Development Block Grant, Tennessee Main Street and ThreeStar.  ECD fund initiatives to connect communities to advance economic development through funding and technical assistance.  ECD has programs to support large industries, small businesses and attract new business.  ECD promotes Tennessee as a great place to make a living because at the heart of a competitive economic development strategy is community development.

How to add green space to urban areas?

Why are zoning policies important to health?

Zoning is a land use planning tool.  Zoning has been used in urban, suburban and rural settings.  Zoning means what can go where.  What goes where can have a major impact on health.  Zoning policy can influence neighborhood factors that lead to health outcomes such as physical activity, violent crime and obesity.  Zoning can be used to restrict or prohibit certain land uses in certain areas.  Zoning can help to slow sprawl.  Zoning can encourage certain land uses.  For example, mixed use zoning is a type of development that integrates residential, commercial, cultural, institutional and industrial uses together to improve function, connection and walkability.  Mixed use zoning can increase density connecting people and places leading to more active transportation and physical activity.  Zoning policies can encourage or require healthier options such as sidewalks, bike lanes, affordable housing or green spaces.  Effective zoning policies can increase property values and decrease health inequities.

What is different about urban data?

In urban communities with larger population sizes there is often a lot of data available.  Sometimes with the increased density of urban areas, there may be many data layers to consider or filter through.  Many local governments maintain property maps which are a great tool for planning.  Even with increased data availability, urban areas often change character over short distances.  It may not be possible to separate these small-scale differences.  Still, descriptive data should be easiest to find for urban areas.