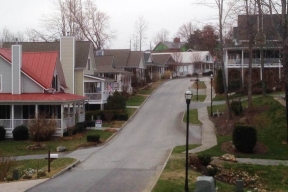 How are neighborhoods defined?

Neighborhoods are social units in the sense that they are not directly controlled by government.  People choose how and where to participate in neighborhood interactions.  Neighborhoods often cut across boundaries set up by government such as Census blocks or voting districts or even roads or landscape.  Ultimately, neighborhood boundaries are determined by the residents.

Neighborhoods are unique.  The cultural norms, values and interests can vary greatly from a neighborhood in one part of town to another part of town and certainly from city to countryside.  While some may seem similar, no two are alike as the people and places change from neighborhood to neighborhood.

One thing that remains true across neighborhoods is those that are well designed to serve all members of their community, including the young, old and those with disabilities, are more likely to thrive.  Thriving neighborhoods also increase property values.  Healthy neighborhoods improve the quality of their residents’ lives.

How can neighborhoods encourage physical activity?

Public spaces are best when focused on how people use and benefit from the space.  Here are some ideas to consider to help make neighborhood placemaking more inviting to people:

What can neighborhoods do to benefit children?

Neighborhoods that are well-designed serve all members of the community including the young, old and those with disabilities.  Some ideas to consider that will benefit children include:

What can neighborhoods do to benefit older adults?

As the baby boomer generation ages into retirement, seniors prefer to remain in the same communities where they worked and raised a family.  Older people have different needs when it comes to remaining physically active as they age.  Much more information can be read on our Healthy Aging webpage.  Here are some things to consider that will benefit seniors in your neighborhood:

What are some topics that neighborhoods are concerned about?

How can neighborhoods participate in planning?

What is a neighborhood watch?

How can neighborhoods change?

Neighborhoods can change in many ways, both positive and negative.  Sometimes changes are perceived by the residents and other times changes are very real.  Both real and perceived changes are important to shaping and maintaining neighborhoods that support health.  Neighborhood revitalization is a process of rebuilding neighborhoods to create new opportunities.  Revitalization creates opportunities for not only residential housing options but also for planning, beautification, entrepreneurship, business development, transportation and public spaces.  It is the opinion of many people that revitalized neighborhoods help cities and towns grow into places people want to live, work, learn and play.

Gentrification occurs when neighborhoods increase in property value to the point when lower-income families and businesses are displaced.  In a community experiencing gentrification, costs increase to the point where some residents are unable to afford rent or property taxes making it necessary for them to relocate.  Gentrification is changing demographics, real estate markets, land use and culture.  Gentrification is becoming a more common topic as some revitalized neighborhoods change.  Some people view the population changes as negative while other people view the changes as positive reinvestment in their community making it an even better place to be.

How can anchor institutions lead?

Anchor institutions are the major employers and property owners of a community.  Anchor institutions such as government offices, universities, hospitals, factories, call centers and big box stores can be catalysts for economic and community development.  These large entities can take on a variety of roles from building infrastructure to purchaser of local goods or even redeveloper of blighted real estate.  Anchor institutions can assist communities’ health needs by supporting social determinants of health like neighborhood safety, community engagement and continuing education.

What can neighborhoods do to build community?

Here are some ideas to build community in your neighborhood:

What is a food desert?

Some neighborhoods do not have access to affordable and healthy foods choices.  Sometimes these areas are called food deserts.  Eating a nutritious diet is important to help prevent diabetes, cardiovascular disease, obesity and certain cancers.  Neighborhoods benefit from having proximity to grocery stores, retail stores, farmers markets and community gardens.  Visit our Food & Nutrition webpage for more ideas.

What is my area Human Resource Agency?

There are ten Human Resource Agencies in Tennessee. These agencies deliver social services across the state to help people to have a sense of self-worth and wellbeing.  Their services cover a broad range of human needs including children and youth; community services; community intervention; education and employment; nutrition; elderly and disabled; housing; transportation; and healthcare.

What tools are out there for neighborhoods?

Many cities and towns have a way for neighborhood groups to register with the local government.  This sharing of contact information improves the sharing of information.  It helps local governments keep their neighborhoods informed of activities and opportunities.  It also provides a way to alert neighborhoods about forthcoming changes or proposals for new development.  Many tool kits have been developed to help neighborhood groups organize and strategically plan, some of which are noted as additional resources below.  Many neighborhoods have published their successful strategies on the Internet; a quick search will show lots of great neighborhood ideas.  Social media is a new tool for neighborhoods.  There are many options for neighbors to be friends in the virtual world now in addition to the real world.  Celebrate National Good Neighbor Day each year on September 28.