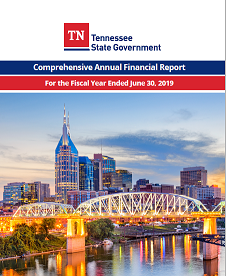 NASHVILLE, Tenn. – Tennessee’s commitment to accuracy and completeness in financial reporting has once again earned the state national recognition.

The Government Finance Officers Association (GFOA) awarded the state its “Certificate of Achievement for Excellence in Financial Reporting” for the Comprehensive Annual Financial Report (CAFR) for the fiscal year that ended June 30, 2019. It’s the 40th year the state has received the recognition – the most any state in the nation has been awarded the certificate. The division of accounts in the department of finance and administration produces the annual report in a year-long process of overseeing state finances.

“Tennessee’s annual financial report is a complete view of the state’s stewardship of public money and other assets, helping in decision-making and increasing accountability, openness and transparency,” F&A Commissioner Butch Eley said. “The preparation of the report requires the collective efforts of literally hundreds of financial personnel throughout state government, and the receipt of this award is evidence of their commitment to supporting and recording Tennessee’s financial activity.”

According to the GFOA, the CAFR has been judged by an impartial panel to meet the high standards of the program, which includes demonstrating a constructive "spirit of full disclosure" to clearly communicate its financial story and motivate potential users and user groups to read the CAFR.

The Certificate of Achievement is the highest form of recognition in the area of governmental accounting and financial reporting, and its attainment represents a significant accomplishment by a government and its management.

CAFR reports dating back to 1997 are available electronically on the state’s website.

The division of accounts maintains a statewide structure and related policies and procedures to allow all branches of government to meet their reporting needs and assists all state agencies in the operations of the state accounting system.

The Government Finance Officers Association (GFOA) advances excellence in government finance by providing best practices, professional development, resources, and practical research for more than 21,000 members and the communities they serve.