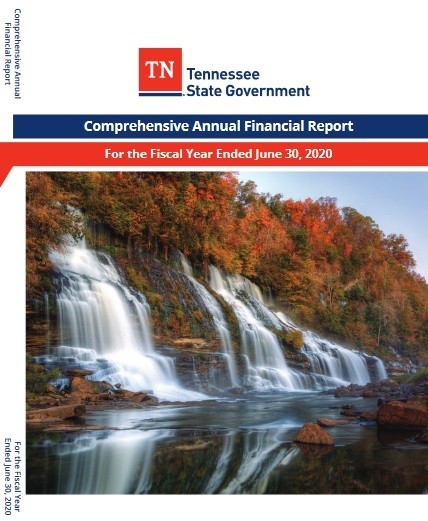 NASHVILLE, Tenn. – The state of Tennessee has completed its annual financial report for fiscal year 2019-20. The Comprehensive Annual Financial Report (CAFR) is prepared by the Department of Finance and Administration Division of Accounts, in accordance with Generally Accepted Accounting Principles (GAAP) applicable to governments as prescribed by the Governmental Accounting Standards Board (GASB). The objective of the report is to present a clear picture of Tennessee state government as a single comprehensive reporting entity.

“The preparation of this report requires the collective effort of literally hundreds of financial personnel throughout state government,” Commissioner Butch Eley said. “The division of accounts team worked with controllers, fiscal officers and staff at each agency to produce a report that will serve as a helpful source of information for anyone having an interest in the financial operations of the state. This year’s report is complete earlier than many previous years, despite the impact of the pandemic on our work environment, our families and our lives, which is a testament to the dedication and commitment to excellence of the state government team.”

The state’s 2019 CAFR received the Government Finance Officers Certificate of Achievement for Excellence in Financial Reporting for the 40th year, which is the most any state has been awarded. The award is the highest form of recognition in governmental accounting and financial reporting, and its attainment represents a significant accomplishment by a government and its management.

The CAFR consists of three sections: Introductory, Financial and Statistical. The Introductory section orients and guides the reader through the report. The Financial section presents the entity’s basic financial statements as well as notes to the statements and the independent auditors’ report. The Statistical section provides additional financial and statistical data, including data about financial trends that may better inform the reader about the government’s activities.

CAFR reports dating back to 1997 are available electronically on the state’s website at https://www.tn.gov/finance/rd-doa/fa-accfin-cafr.html