Contraction and expansions of the U.S. economy are dated by the National Bureau of Economic Research (NBER) a private, non-profit, non-partisan research organization composed of academic and non-academic economic researchers from across the country. The NBER Business Cycle Dating Committee is the group that determines the date of the beginning and end of phases of U.S. business cycles.

The committee offers the following statement regarding the determinants for dating turning points:

The NBER does not define a recession in terms of two consecutive quarters of decline in real GDP. Rather, a recession is a significant decline in economic activity spread across the economy, lasting more than a few months, normally visible in real GDP, real income, employment, industrial production, and wholesale-retail sales. For more information, see the latest announcement from the NBER's Business Cycle Dating Committee, dated 12/01/08.

Employment
As of April 2009, the recession was in its 17th month which makes it longer than any post-World War II contraction to date. The recessions of July 1981 to November 1982 and November 1973 to March 1975 both lasted 16 months. By comparison, total employment during the 1981-82 recession fell by 3.1 percent from the beginning of the recession to its bottom while, so far in the current contraction, employment has fallen by over 4.2 percent.

The above chart shows the number of Tennesseans in the labor force and the total number employed since January 2005. The labor force is defined as the number of persons, aged 16 and older, who are employed or are actively seeking work. That number typically moves up and down as the economy expands and contracts. The data are provided for non-farm employment only on a monthly basis since farm employment is highly seasonal.

Employment by Sector for Tennessee 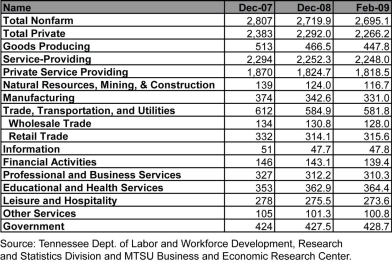 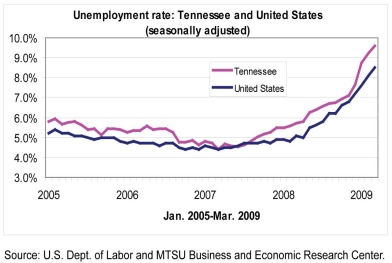 As can be seen from the graph of the U.S and Tennessee unemployment rates the state economy does not track perfectly with the national economy. [That observation is even more true in comparisons among the three Grand Divisions of Tennessee and rural versus urban counties]. Again, comparing Tennessee’s experience in the 1981-82 recession with the current situation and the national economy there are substantial differences. 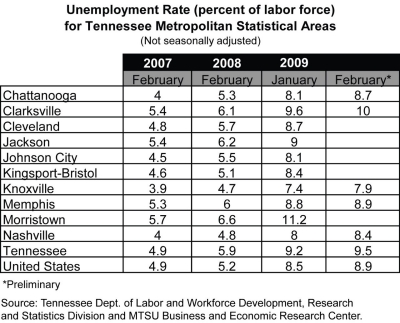 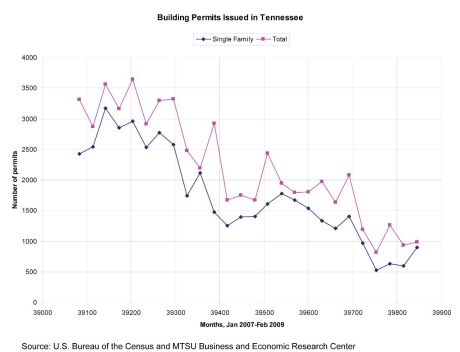