In the FY18 budget, Governor Haslam and the Tennessee General Assembly provided $15 million in funding for pre-arrest diversion infrastructure.  This non-recurring funding was competitively bid to grantees with a goal of supporting local communities in infrastructure development aimed at reducing or eliminating the time individuals with mental illness, substance use, or co-occurring disorder spend incarcerated by redirecting them from the criminal justice system to community-based treatment and supports.  An essential component of the process was leveraging local funding to support the state's investment.  Through this process, local partners were able to commit $4 million to supplement the funding from TDMHSAS.

In the FY20 budget, Governor Lee and the Tennessee General Assembly provided an additional $1.5 million for a second round of pre-arrest diversion infrastructure grants.  Applicants were asked to focus on rural, underserved, and distressed areas of the state with emphasis on local community investment to sustain programming after the capital grant.  Selected agencies have designed programs to serve residents of at least eleven rural counties including two distressed counties.  Grant recommendations were made by TDMHSAS, in consultation with the Department of Finance and Administration, and will be administered by the Department of General Services after approval by the State Building Commission.

1. Successfully develop infrastructure and services aimed at diverting individuals with behavioral health needs away from jail to appropriate community-based treatment.

3. Demonstrate a collaborative and coordinated system-wide approach among local behavioral health providers, law enforcement, and the judicial system within the community to pre-arrest diversion.

Crisis services will be expanded to include a 24/7 walk-in-center with observation and respite services located in Cleveland to serve Bradley and surrounding counties.  An existing crisis stabilization unit in Hamilton County will be available to support the expanded crisis services. 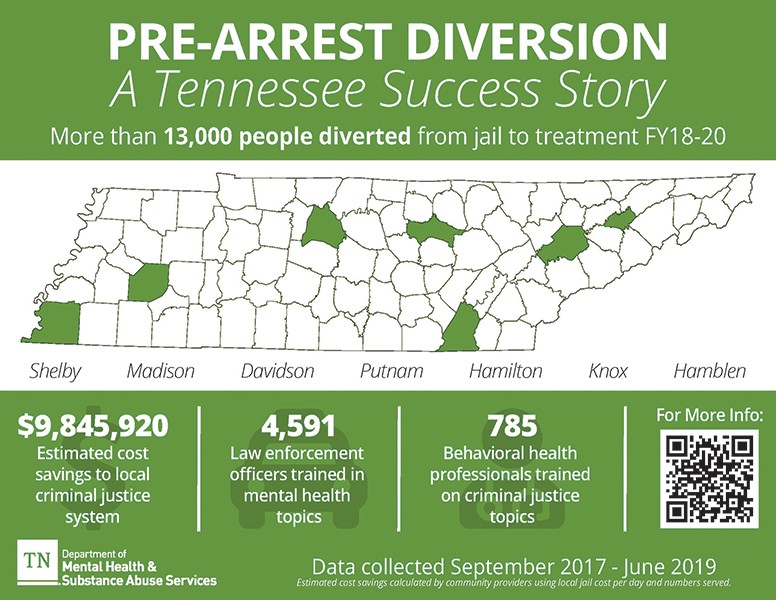