The work to improve outcomes for people living with mental health challenges who encounter law enforcement is more than 30 years old, and Tennessee is a pioneer in the work.  The so-called "Memphis Model" of Crisis Intervention Team (CIT) training dates to 1988 and the work of now retired Memphis Police Major Sam Cochran.  CIT training is a specialized, 40-hour program for law enforcement officers, and in conjunction with robust community partnerships, the goal is to improve outcomes of encounters with people living with behavioral health challenges.  In the 30 plus years since it was created, the CIT model has spread across the nation and even been replicated around the world.

In recent years, TDMHSAS has partnered with the Tennessee Department of Correction, NAMI-TN, and Major Cochran to head the CIT in Tennessee Taskforce.  With grant funding from the U.S. Department of Justice, this taskforce has worked to document the usage of CIT in Tennessee, develop best practices, and expand CIT to new areas of the state.  Enthusiasm for CIT has spread to the point where some agencies have committed to having every officer trained in CIT, and even some jail staff, fire departments, and emergency medical services professionals have been trained in CIT.

With the nation's focus on policing practices, mental health, and improving outcomes for everyone involved, CIT has never been more important or more relevant.  Learn more about CIT in Tennessee.

Counties with CIT Coalitions have established a team comprising law enforcement, mental health providers, and other stakeholders.  These coalitions often have representation from multiple law enforcement agencies with officers trained in CIT and a significant buy-in to continuing and expanding the CIT model.  Counties represented on the map as having completed trainings may be working toward establishing a coalition, or they may have held a training at one or more agencies and put the CIT principles into action.  Prospective counties include those where an interest in CIT has been expressed, outreach has been conducted, and stakeholders are working toward conducting a training.

How does CIT work in Tennessee?

This in-depth report published in October 2019 by NAMI-TN in partnership with TDMHSAS and TDOC offers a road map for the continued development and enhancement of CIT programs.  Click this link or the cover image to view the report. 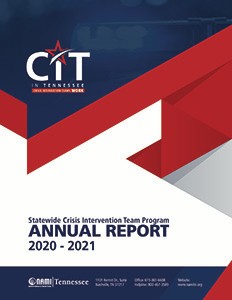 To learn more about CIT in Tennessee, please contact: