The Mission of the Tennessee Dangerous Drugs Task Force is to reduce the availability and illegal use of harmful scheduled drugs, including:

Click a tile for drug facts for that specific substance.

By educating the public about the dangers of all scheduled drugs;

By networking with regulatory agencies, healthcare providers and treatment providers;

By protecting the public and the drug endangered children of Tennessee from the harmful effects of manufacturing, distribution, and illegal use of the scheduled drugs.

The motto of the Tennessee Dangerous Drugs Task Force continues to be "Protect, Enforce, and Educate".

The Tennessee Dangerous Drugs Task Force began in 1999 as a small coalition of law enforcement agencies from Franklin, Grundy, Marion, Sequatchie, and Warren counties dedicated to ridding these largely rural areas of the growing problem of clandestine meth labs that had begun to pop up across the countryside by providing training and equipment to local law enforcement agencies that were not able to acquire them on their own. In September of 2000, the task force was formally established as the South Tennessee Meth Task Force and included 18 counties in the southern part of the state.

As the meth problem grew from a rural anomaly to a widespread issue in more parts of the state, the Task Force grew accordingly, expanding in 2002 to cover the whole Eastern region of Tennessee, as well as Fentress, Morgan, and Scott counties, adopting the name South/East Tennessee Meth Task Force to reflect its expanded area of operations. In addition to expanding the number of counties it serviced, the task force also sought to provide further support to law enforcement by establishing a network of lab response trucks and drivers that would be more flexible than existing DEA services, the first of which is shown to the left.

In the following years, law enforcement agencies in the Western region of Tennessee began to request task force services, resulting in the expansion of the S/EMTF to become the East & West Tennessee Meth Task Force, now operating across the entire Western region in addition to its existing jurisdiction. 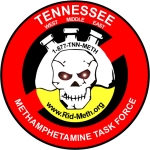 From there, the task force grew rapidly, expanding to encapsulate the entire state by 2006 to become the Tennessee Meth Task Force following the introduction of the Meth Free Tennessee Act in 2005. Tennessee continued to see a rise in meth cases for the next few years, but the TMTF rose to the challenge, expanding the response and support program to a total of 15 response trucks in 2007, which were strategically located across the state in order to be able to respond to any call inside state lines within two hours.

Eventually meth cooks learned the lesson printed on the side of every truck that came to their would-be meth labs: "If you cook it, we will come." But the decline in meth labs came just as a new drug trend began to emerge: pharmaceutical abuse. 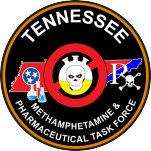 The rise in use of opioids and other pharmaceuticals as mind-altering agents prompted the TMTF to take on the additional challenges of prescription drug diversion, doctor shopping, pill mills, and overdoses under the new name of the Tennessee Meth & Pharmaceutical Task Force.

As part of this expansion, the task force launched multiple new programs to aid law enforcement and everyday citizens alike to do their part to combat the growing epidemic, such as the Pill Take Back program, which allows civilians to securely dispose of old or unwanted medications at secure lockboxes monitored by trusted agencies and community coalitions, which are then collected and incinerated by the task force response drivers. 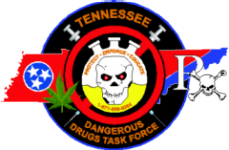 The growing trend in non-pharmaceutical opioids such as heroin, and more recently fentanyl, moved the task force to widen its scope one more time to include all illicit and illegal drug activity in its mission to protect, enforce and educate under the name the Tennessee Dangerous Drugs Task Force, leading us to where we stand today as Tennessee's foremost drug intelligence and education agency.