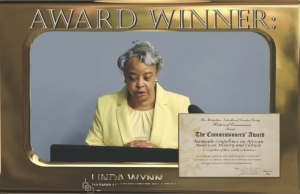 Since 1981, the Nashville Conference on African American History and Culture has celebrated the heritage and achievements of African American individuals and institutions in Tennessee’s past. This annual event was initiated by Linda T. Wynn of the Tennessee Historical Commission and a small group of history professionals that included Bobby L. Lovett and Lois C. McDougald of Tennessee State University and May Dean Eberling of the Metropolitan Historical Commission.

In 1996, Profiles of African Americans in Tennessee was published to honor the conference’s 15th anniversary. For this, its fortieth year, the conference welcomed over 200 attendees to its first virtual program, published an expanded digital edition of the Profiles book, and launched a new website (www.NCAAHC.org) filled with four decades of archives.

The foresight of the conference’s founding members, the devotion of its planning committees, and the loyalty of its patrons have drawn recognition from local and state leaders, earning the conference many accolades. In 1990, the American Association of State and Local History awarded the Conference a Certificate of Commendation. The award, which recognizes special projects throughout the United States, was announced at the national association’s annual meeting in Washington, D.C. The Tennessee Historical Commission also awarded the Conference with a Certificate of Merit in 2017.

The recognition that Mrs. Wynn received from the Metropolitan Historical Commission for her continued leadership role in the conference is well deserved and applauded by all at THC.