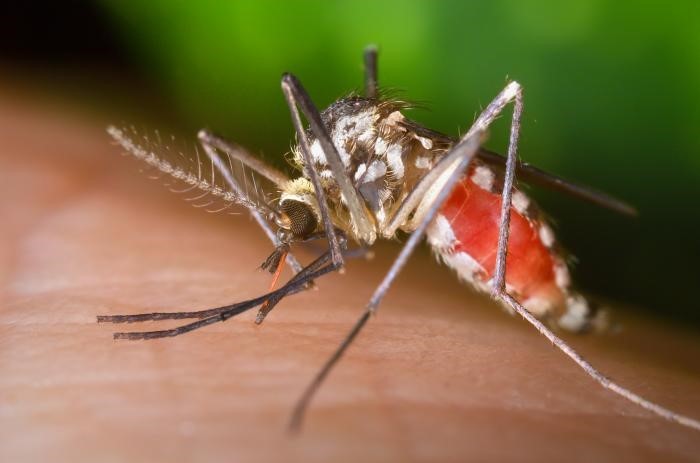 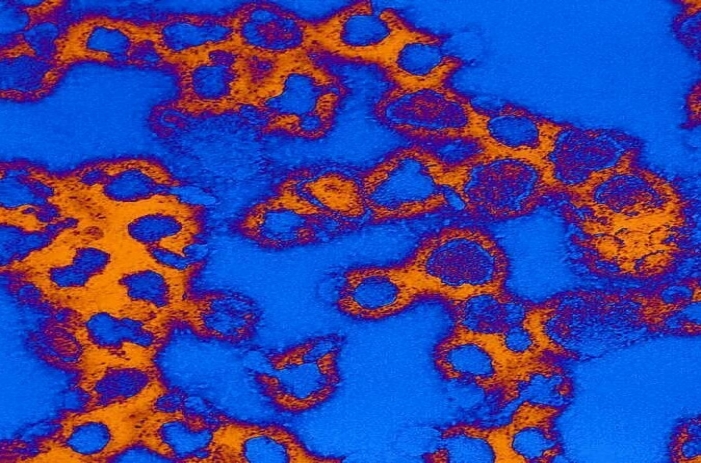 La Crosse virus (LACV) is a pathogen transmitted by the bite of an infected Aedes mosquito, most commonly the Eastern Treehole mosquito. Once infected by this virus, some people may develop severe neuroinvasive disease such as La Crosse Encephalitis (LACE), as well as seizures, coma, and paralysis. Severe disease occurs most often in children under the age of 16.

In 2022, there was 1 probable or confirmed case of LACE in Tennessee, and the patient was less than 5 years old. This pattern is not uncommon: over the past decade, approximately 99% of all LACE cases reported in Tennessee had neuroinvasive symptoms, because LACV testing is rarely done for a mild febrile illness.

Where does LACE occur in Tennessee?

The gradient on the map below refers to average LACE incidence rates for each county in Tennesee from 2012-2022, which was calculated using county population data from the 2020 U.S. Census.

According to data from the past ten years, LACE cases are generally reported in the Eastern portion of the state.

What time of year are Tennesseeans at risk for contracting LACV?

In Tennessee, illness onset for cases of LACE is mainly reported in the warmer months of the year. The number of reported LACE cases is lowest in the winter and spring (December-April), slightly increases in the early- to mid-summer (May-July), peaks in August, and then gradually declines through autumn (September-November).

Signs and symptoms of LACE typically begin 3-10 days after being bitten by an infected mosquito. Late spring through mid summer is the time of year when Tennesseans are most at risk for contracting LACV from a mosquito. 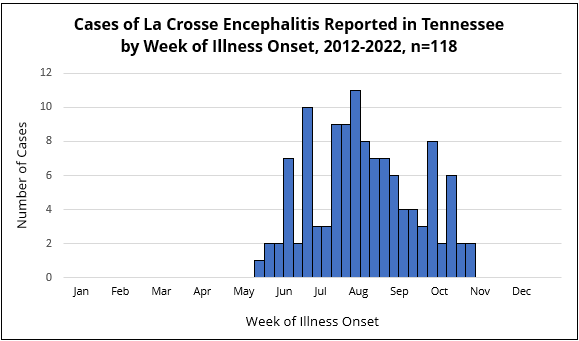 Note: The n=118 in this chart refers to reported cases of LACE from 2012-2022 with recorded illness onset dates. Thus, this figure only accounts for a portion of the total number of LACE cases reported during this time period.
Who is at risk of developing LACE in Tennessee?

Anyone who spends time outdoors in Tennessee is at risk of contracting LACV from the bite of an infected mosquito. However, the majority of people infected with LACV do not develop LACE. The severe neuroinvasive disease associated with LACE occurs most frequently in chlidren under the age of 16 years. 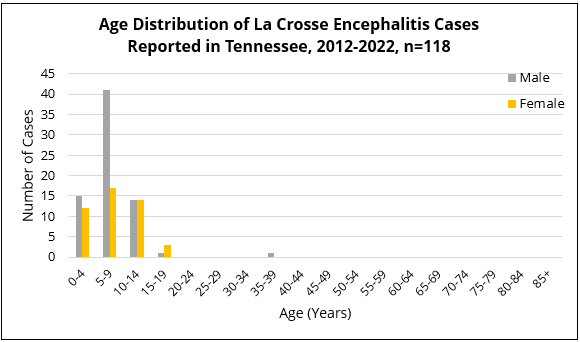 What are the trends of LACE cases in Tennessee over time?

LACE is most often diagnosed for severe cases, because testing for this virus is rarely done on patients presenting with mild febrile illness. As a result, most LACE cases have already developed severe neuroinvasive disease by the time that they are diagnosed, leading to a high hospitalization rate.

Over the last 10 years in Tennessee, 96% of LACE cases were hospitalized for severe illness. Although LACE case numbers decreased in 2015 and 2021-2022, there has been a median of approximately 15 cases per year in our state. 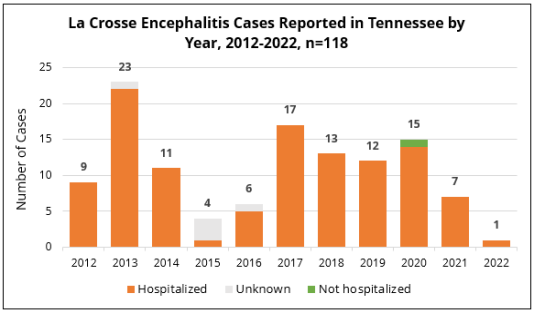 What are the signs and symptoms of LACE?

Most people infected with LACV do not have any symptoms. For those who do develop symptoms, the time from infected mosquito bite to feeling sick ranges from 3-10 days. Early signs and symptoms are usually mild or moderate, and they may include:

Severe neuroinvasive disease classified as LACE occurs most frequently in children under the age of 16 years. Although seizures and other nervous system conditions are common, most patients recover completely. However, some effects on the central nervous system from severe LACE can persist overtime. Long-term effects can include:

How is LACE diagnosed?

LACE is diagnosed by a healthcare provider, who can order blood tests to look for evidence of LACV infection if you experience the symptoms described above. For more information, see the CDC's LACE Symptoms, Diagnosis, & Treatment web page.