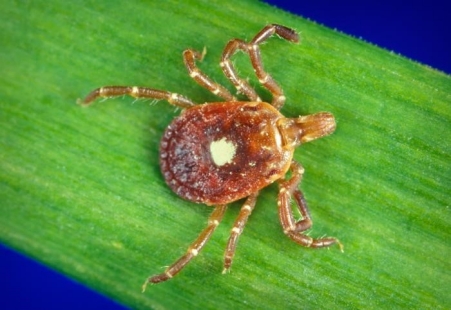 Description of illness: Symptoms include fever, headache, chills, malaise, muscle pain, gastrointestinal symptoms (nausea, vomiting, diarrhea, anorexia), confusion, conjunctival injection, rash (more commonly reported among children).  Few people will develop all symptoms and the number and combination of symptoms varies greatly from person to person. Similar symptoms are seen with anaplasmosis but they occur in different regions of the U.S. with ehrlichiosis most frequently reported from the southeastern and south-central U.S., from the eastern seaboard extending westward to Texas. The areas from which cases are reported correspond with the known geographic distribution of the lone star tick (Amblyomma americanum), which is associated with transmission of both E. chaffeensis and E. ewingii. Three states (Oklahoma, Missouri, Arkansas) account for 35% of all reported E. chaffeensis infections. Since 2009, >70 cases of ehrlichiosis caused by Ehrlichia muris eauclarensis, have been identifed in patients in the upper Midwest. The tick responsible for transmitting this new subspecies is suspected to be Ixodes scapularis and the clinical presentation is generally similar to those associated with infections caused by E. chaffeensis and E. ewingii. No deaths have been reported.

Learn more about this disease