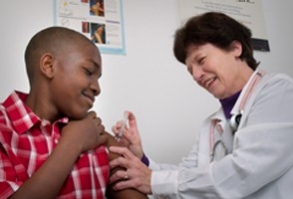 Immunization is one of the most effective ways to prevent disease. If a child is not vaccinated and is exposed to a disease germ, the child’s body may not be strong enough to fight the disease.

Prior to widespread immunization in the United States, infectious diseases killed or disabled thousands of children each year. Those same germs exist today, but babies are now protected by vaccines. We do not see these diseases as often, however, outbreaks do still occur among young children because some babies are not immunized or get sick before they are immunized.

It is recommended that infants and toddlers in the United States receive vaccinations against the following diseases:

Pre-teens and teenagers need a DTaP booster dose of protection against tetanus, diphtheria and pertussis and should be vaccinated against meningococcal meningitis and human papillomavirus (a cause of cancers and warts, including cervical cancer). Everyone 6 months and older should get an influenza vaccine every year.

Immunizations begin at birth. Infant vaccinations are completed before age two, with the next vaccines due at age 4 and then at age 11 or 12. By immunizing on time, you can give your child the best protection from infections and prevent the infection of others at school or at day care centers. While all 50 states and the District of Columbia have immunization requirements for children entering day care and school, the laws do not guarantee that a child is protected on time.

Making sure that children are up to date on recommended immunizations also helps to protect the health of our community. People whose bodies are weak or vulnerable are not as likely to be exposed to disease germs that can be passed around by unvaccinated children. Children are a common source of influenza infections in their family members and communities.

In 2009, Tennessee’s 2010 goal of assuring that 90 percent of toddlers receive each recommended vaccine on-time by age 2 was met or surpassed for five of seven recommended vaccinations of children—Hib meningitis, hepatitis B, MMR, polio and varicella. The two remaining vaccines require 4 doses by age two, DTaP and pneumococcal vaccine (PCV). On time coverage for DTaP reached over 84 percent and PCV coverage was more than 80 percent, and continues to progress towards meeting set immunization goals. Target levels of immunization against hepatitis A, rotavirus diarrhea and influenza are not yet at 90 percent because these have been recommended for less than 5 years, but coverage is improving each year.

Vaccination has been one of the 20th Century's most effective tools for preventing disease and death. At the beginning of the last century, five vaccines had been developed. In 2010, children are routinely protected against 16 diseases by the time they reach adolescence. Vaccine preventable disease levels have been reduced by over 99 percent since the introduction of vaccines; however, these diseases are still causing illness in the world and are ready to return if we let down our efforts to protect children and adults through vaccines.