Greenways and trails are linear open spaces.  Greenways and trails often follow either a natural corridor, such as a riverfront, stream valley, ridge line or overland corridor along a converted railroad, canal, scenic road or other route.  Greenways can be any natural or landscaped area that allows for pedestrian or bicycle passage.  Trails tend to be more rough and rustic.  Greenways and trails are a great way to link to parks, nature preserves, historic or cultural features, schools and neighborhoods with each other.  Greenway and trails can be used for active transportation, recreation and fitness activities. 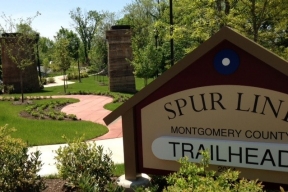 Learn more about the Little Duck River Greenway from these videos.

What are greenways and trails?

Where are greenways and trails?

There are about a thousand greenways and trails crossing Tennessee.  Visit the Connect with Tennessee website for an online greenway and trail finder and more information.

What is a blueway?

A blueway is a water trail.  Blueways would most often be used by canoeists, paddle boarders or kayakers.  Blueway trails are good for physical activity while enjoying recreation and wildlife viewing.  Blueways may be a series of connected camp sites, launch points or places of interest.  Some blueways are one-way adventures.  The Tennessee River Blueway was designated as a National Scenic River Trail in 2002.  It flows through Chattanooga for 48 miles from Chickamauga Dam to Nickajack Dam.

What makes a good greenway?

One of the great aspects of an off-street, hard surfaced greenway is how it can be used for multiple purposes and by many different people.  Greenways can be used for transportation, recreation or exercise.  Hard surfaces greenways can be used by walkers, bikers and skaters.  Hard surface greenways benefit people using wheeled chairs as well as pushing strollers.  Greenways may provide natural shade or a shade area may need to be planted or built.  Providing drinking water fountains is also a good idea.  Some greenways may even offer solar stations for recharging mobile devices.  In most locations, greenways will be day use only, while some greenways will provide lighting for use anytime.  Eventually, greenways will pass over low or wet areas.  Those areas will have bridges or boardwalks.  Greenways can have nearby butterfly gardens or wildlife habitat to help people reconnect with nature.  Greenways often incorporate historical or wildlife placards to educate and enrich users experience and appreciation.  Greenways all need maintenance like mowing the trail shoulders, leaf removal, trail surface inspection and trash pickup.  All greenways need to be safe and secure.  Signage for general use and safety information is a must.

What makes a good trail?

Hiking trails are generally unpaved, natural surface paths.  Some hiking trails are simply worn paths constructed by volunteers while others were carefully mapped and used heavy machinery to clear the path.  Some trails are designed for brief use while other trails go deep into the woods.  Signage for general use and safety information is a must.  Trails may need less maintenance than paved greenways, though trails will need maintenance, too.  One important task is trail clearing of branches, leaves, weeds and other trail impediments.  Trails with camp sites or shelters will have some additional maintenance.  Appropriate locking refuse containers at trailheads will need to be emptied on a regular basis.  TDEC’s Tracks and Trails Resource Guild (PDF) has examples of successful trails in Tennessee.

How to fund greenways and trails?

One of the first steps to get getting a greenway or trail project funded is to plan out the idea.  This will help make your project proposals and grant applications clear and convincing.  For many communities, planning and land acquisition will take several years before greenway or trail construction can begin.  Greenways and trails have been funded several ways.  In some communities, volunteer labor and local donations have been successful in planning and building greenways and trails.  Some counties use transportation planning money from their planning agency or TDOT.  Other grants are funded by TDEC’s Greenways and Trails program.

Sometimes reusing places is a great way to build a new greenway or trail.  Rails-to-trails is a way to convert unused railroad tracks to new paths.  As the railroads own the land the tracks were built on, sometimes the land can be acquired through sale or donation.  There are several highly successful rails-to-trails projects in Tennessee.  The Tweetsie Trail was locally funded and runs some 13 miles between Johnson City and Elizabethton.  The 6.5 mile Shelby Farms Greenline in Memphis was also locally funded.  The Clarksville Greenway is another successful rails-to-trails project.  The Rails-to-Trails Conservancy is a source for more information.

What is trail-oriented development?

Greenways and trails allow for active transportation.  More evidence is emerging that communities with more opportunities for walking and biking are in demand and increasing in property value.  Connecting people to housing, work, school, shopping and entertainment by greenways and trails is growing in popularity.  These communities are good for public health as a greater percentage of the population actively commute.  Trail-oriented development also has a positive impact on traffic congestion and thus air quality.  Elected officials, planners, developers and health educators can all be on the look out to increase opportunities for trail-oriented development.

How do greenways and trails benefit the economy?

What is the Appalachian Trail?

The 2,200 mile Appalachian National Scenic Trail or A.T. is a public footpath stretching from Mount Katahdin, Maine, through eastern Tennessee to Springer Mountain, Georgia.  The Appalachian Trail is used by some two million people each year.  Serious backpack hikers travel for weeks to months from town to town along roads and farms.  The A.T. takes people to some of the most beautiful places in the eastern United States.  Find more information about the A.T. online with the Appalachian Trail Conservancy.

What is the Cumberland Trail?

A trail unique to Tennessee is the Justin P. Wilson Cumberland Trail State Park.  The scenic footpath follows a line of high ridges and deep gorges above or near the rugged earthen edge of Tennessee’s Cumberland Plateau.  When complete, the trail will be about 300 miles.  It will be an extension of the Great Eastern Trail extending from Northern New York State to Southern Alabama.  Find more information online about the Cumberland Trail.

How to Bring a Storybook Trail to your Community
governorsfoundation.org