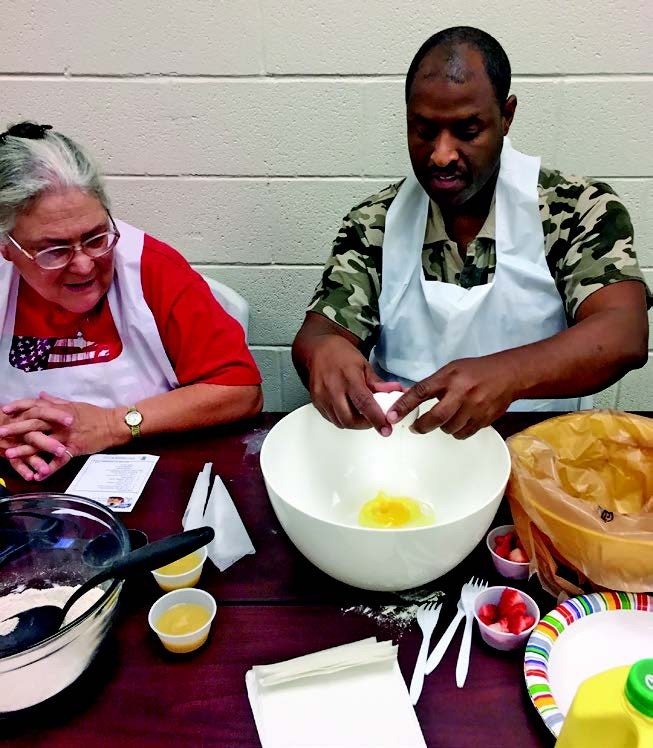 Over the last year or so, my 21-year-old son, Joshua, has expressed a desire to move out and live on his own; a desire and goal I fully support. Unfortunately, like so many parents, after a long day, I’m usually looking for the most efficient way of getting things done. That means me preparing all the family meals instead of involving Joshua in that process had become the norm. So when we began to discuss some of the practical skills he would need to successfully live independently, the topic of meal preparation was at the top of the list.

I asked him what his plans were in terms of cooking his meals. He quickly laid out his plan of eating cereal every morning and ordering take out for lunch and dinner. After hearing that, I explained that not only would he eventually become very unhealthy and lose his abs that he is so proud of, he would also run out of money in just a few short weeks.

Fast forward to 2016. The Arc Rutherford County was invited to participate in the Annual Community Baby Shower sponsored by United Way and the Rutherford County Health Department. During this event, I met Tiffany Schmidt, Tennessee State University Cooperative Extension Agent with Rutherford County Extension Center. Ms. Schmidt was explaining the nutrition education curriculum from TSU Extension called, “Eating Smart During Pregnancy” that they use to educate expectant mothers living on a limited budget. I thought, “WOW, this is an amazing program!”

I explained that I had a young adult son with a disability who was interested in living more independently, and thought he and others would greatly benefit from the information she was sharing about eating healthy on a tight budget. I inquired about classes that he would be eligible for, but unfortunately at that time there wasn’t anything being offered. After further discussion, we agreed to collaborate in planning and preparing for a similar class to accommodate participants with disabilities, focusing on healthy eating and meal preparation.

A year later, on June 8, 2017, after several meetings discussing the logistics on how best to cover the material and which recipes to include, we finally started the six-week “Cooking Capers” class at the Rutherford County Extension Center. We had an amazing group of eight participants and their caregivers from various counties.

I think flexibility was the key to the success of the class. We made several tweaks along the way, from readjusting the cooking stations to demonstrating each step of the recipes in an effort to maximize participation. The focus was on teaching healthy eating habits and learning new cooking skills to help facilitate as much independence as possible.

Some of the various topics covered during the classes were food safety, cooking skills, utensil uses, identifying healthy food groups, and planning/shopping/saving - getting at the cost per meal. Each two-hour session was packed with great information and hands-on activities. Participants practiced making recipes step-by-step and enjoyed eating the fruits of their labor! Many of them had never made homemade pancakes, parfaits, apple salad and omelets.

At the end of each class, everyone took home a recipe card and a new kitchen gadget or tool that they learned to use. By the end of the six-week cooking class, there were some participants that not only said they had tried making some of the recipes they learned in class, but they also purchased the child-safe knife that we introduced during class. This was especially exciting to hear because a particular attendee was afraid of using standard kitchen knives, and now she was excited to prepare her own food more independently with a knife she was comfortable using.

In addition to the participants learning new skills and becoming more independent, the caregivers also reported that the class was beneficial in teaching them new ways to assist the people they were helping, which also made them realize that the individuals they were supporting could do so much more!

As for Joshua,  although he was not initially too sure about the idea of taking a cooking class,  every time he showed up he had fun, learned something new and ate something tasty! The best part came several weeks after class ended. He woke up one morning and told me he was making himself an omelet for breakfast. And, with very little assistance from me, he did just that!

As a result of the implementation and success of this program, Rutherford County Extension, with the help of community volunteers, offered another six-week cooking class in October utilizing hands-on activities and providing the opportunity to prepare more delicious, healthy and affordable recipes. My hope is that other UT/TSU Cooperative Extension Agents will look into starting similar programs in their counties as well.

Tiffany Horton is the parent of a 22- year-old son with a disability and two daughters, 19 and 14. She is a 2014-15 graduate of the Council's Partners in Policymaking Leadership Institute and a board member of the Arc of Rutherford County.