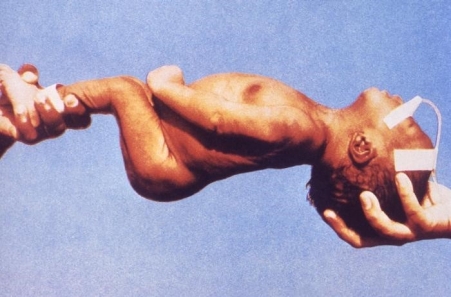 Tetanus is a serious, vaccine-preventable illness caused by a toxin produced by the spore-forming bacterium Clostridium tetani. Tetanus is a clinical diagnosis: there is no confirmatory laboratory test. About 30 cases are reported in the United States each year, typically in unvaccinated persons or older adults who have not stayed up to date on 10-year booster vaccinations. The bacteria are usually found in soil, dust or manure and enter the body through breaks in the skin – usually cuts or punctures caused by contaminated objects: the incubation period ranges from 3-21 days (average 10 days). It does not spread from person-to-person.

Eighty percent of tetanus is generalized tetanus: 1-2 out of 10 patients die. The disease usually starts with trismus, or lockjaw, followed by stiffness of the neck, difficulty swallowing, and rigidity of the abdominal muscles. Other symptoms include elevated temperature, sweating, elevated blood pressure, and episodes of rapid heart rate. Severe, painful muscle spasms may occur for 3-4 weeks. Complications include broken bones, blood clots, pneumonia and death.

Two more rare forms of tetanus include local or cephalic tetanus, either of which may progress to generalized tetanus. Local tetanus is most likely to occur in a partially immune person and causes muscles to contract only near the site of the injury. Contractions may persist for weeks before subsiding. Cephalic tetanus is the rarest, associated with breaks in skin on the head or with otitis media. It has a brief 1-2 day incubation period and causes flaccid cranial nerve palsies and jaw spasms.