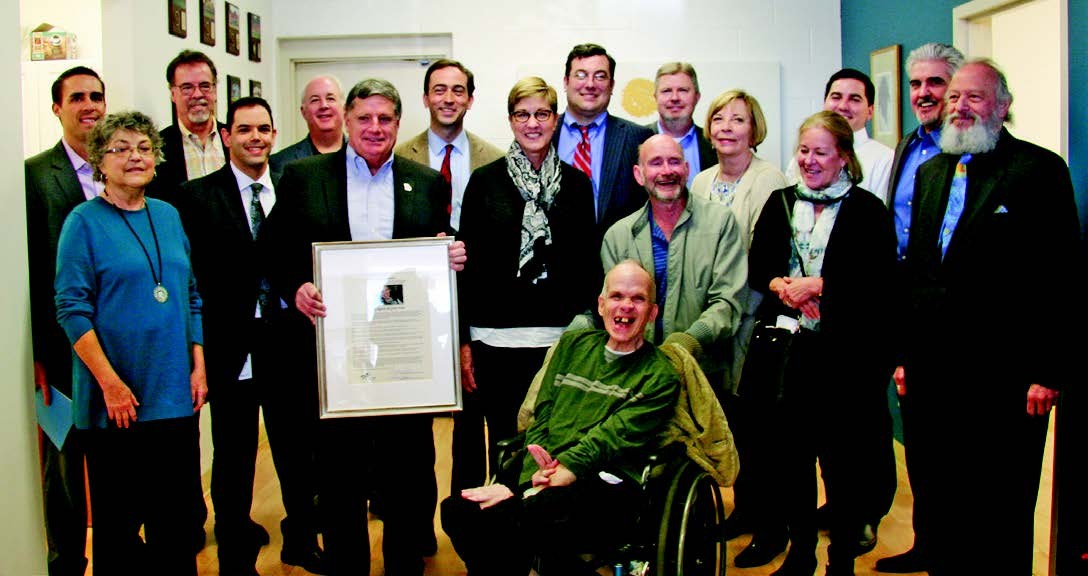 At the March 22, 2018 meeting of the Board of Directors of United Cerebral Palsy of Middle Tennessee (UCP), long time UCP volunteer Martin McGrath was presented with a genuine surprise. On that day, in front of Martin’s extended family members who had gathered at the UCP office for a celebratory luncheon, the Board of Directors established “The Martin McGrath Fund,” a perpetual endowment, named in Martin’s honor. The fund was created through a $200,000 contribution from William Millard Choate of Atlanta, Georgia through the Choate Family Fund at the Community Foundation for Atlanta.

Martin has known Millard Choate since childhood. “He is connected to my family by marriage, and even though Millard is not my blood relative, that’s how we think of each other,” said Martin.

According to Choate, “Martin McGrath has been a pivotal influence in my life. He is a man of compassion and intelligence, and I admire his positive outlook on life. I appreciate his commitment to do all he has done for UCP. This gift is in the form of a challenge for the community to raise another $100,000 so the annual distributions from the endowment can make a positive difference for United Cerebral Palsy and the people that Martin cares about so deeply.”

When Martin was born in 1950, children with severe cerebral palsy were routinely institutionalized. At 68 years old, Martin doesn’t hesitate when he explains why he was never placed in an institution, “I was blessed with a good family. We are caring and loving.”

Martin’s recognition of his family’s love did not shield him from the stark realities of life for people with disabilities growing up in the 1950s and 60s. His mother died when he was only 14 years old. “After that, there was never a time when I didn’t worry about where I was going to live,” he said. “It has always been on my mind.”

After his mother died, Martin shared time between his dad’s and his maternal grandparents’ home. By the time Martin was 23, his dad had also passed away. “My grandparents and my uncles told me not to worry, that I would be cared for,” recalled Martin. “But that couldn’t stop me from worrying.”

Martin grew up in Nashville. He attended Calvert School, where he was placed in special education classes. After graduation in June 1971, Martin was presented with a unique opportunity: he and four other young adults with disabilities were invited to participate in a five-day experiment sponsored by George Peabody College for Teachers (now a part of Vanderbilt University).

“Looking back,” he said, “this five-day excursion led me to the discovery of the most wonderful phrase in our English language, ‘being independent.’”

The young adults were provided with a house, but that was it; no way to get up the steps; no one to cook or clean. The group started by figuring out how to acquire lumber and they built a wheelchair ramp. Once they were safely inside, they collaborated on cooking, cleaning and all the other things necessary to run a home. They fell down (literally) and got back up and started all over again. The group planned their own daily activities, shopping for groceries and even a trout fishing venture. Most importantly, they talked, and talked – sometimes staying up until 2:00 in the morning.

“For the first time in my life, I really felt in command of things,” said Martin.

These five days led Martin to take on one of the biggest challenges of his life. He became determined to enroll at George Peabody College. This was no small feat, as his high school diploma was a special education degree. He had to convince the Dean of Admission and the Chairman of the Special Education Department that he was capable of performing college-level work. He had to find funding for tuition, and he needed personal assistants to make it possible for him to live in a dormitory and attend classes.

What Martin learned was that he was ready for college, but college was not ready for him. In 1972, there was no Americans with Disabilities Act mandating public accommodations. There were architectural barriers all over campus. He couldn’t even access the library for essential classwork because there were no ramps. His special education coursework had left gaps in his academic preparation, so Martin had to work hard to catch up. Despite this, Martin thrived in his classes, and he discovered to his great delight that he could compete academically with his non-disabled peers.

The higher education barrier he ultimately could not overcome was the need for quality personal assistance. Vocational Rehabilitation Services (VR) had agreed to pay students to assist Martin with activities of daily living. Unfortunately, the students were not always reliable in meeting Martin’s needs, sometimes because they had their own activities far from Martin in other areas of the campus; often because they stayed out late and simply failed to show up.

“For the first time in my life, I began to realize that the values of friendship do not always hold things together!” Martin said. “Throughout my life, I had things done for me either out of love or friendship and I did not have to worry about a price tag. My parents had tried to get this same point across to me when I was young, emphasizing that although I might have difficulty in doing things for myself, there would not always be someone around to help.”

Due to barriers outside his control, Martin had to leave Peabody before he attained his degree. Despite this, he credits his college experience as one of the most satisfying times in his life. “During my two years at Peabody, I developed and discovered a lot of self-help skills I did not know I had,” he said. “In fact, I am more proud of this than I am of my other accomplishments.”

Martin returned to live with his grandparents. He didn’t let his higher education experience go to waste. In 1978, Martin published a book, “Give Us the Knife, Carving a Lifestyle”. By then, Martin had connected with Jackie Page, another adult in the Nashville area who was advocating for independent living options for people with disabilities. They reached out to other people with disabilities, locally and across the nation who were coming to similar conclusions about the need for a disability civil rights movement. In 1990, the combined efforts of Martin, Jackie, and countless other advocates across the country led to the passage of the Americans with Disabilities Act, the nation’s first comprehensive civil rights law for people with disabilities.

Martin credits former Nashville Mayor Richard Fulton as being one of the greatest influences in his life. Mayor Fulton was one of the founders of United Cerebral Palsy of Middle Tennessee. Martin served on the Board of UCP, and in 2005, Martin became the President of the Board of Directors, the first President of the UCP board to have a significant lifelong disability.

During his time on the Board of Directors, Martin worked with families at UCP to develop the Durable Medical Equipment Exchange Program, through which thousands of people with all types of disabilities receive essential equipment for independence, mobility and safety. He also worked with UCP to develop the agency’s Wheelchair Ramp program, which has, to date, constructed over 2,600 wheelchair ramps on to the homes of people with disabilities throughout Tennessee. In 2006, Martin received Nashville’s highest award for volunteerism, the Mary Catherine Strobel Award, for his leadership and public policy advocacy with UCP.

After Martin’s grandparents passed away, he lived with his uncles. Subsequently, each of his uncles passed away, one by one. With nowhere else to go, Martin was faced with the very real possibility of having to move into a nursing home. With unfailing persistence, a lot of faith and prayers and characteristic inventiveness, Martin and his extended family members worked out an independent living arrangement through the Tennessee CHOICES Program. Martin now lives in a private home in northwest Nashville with a roommate.

For more information about UCP and the Martin McGrath Fund, go to http://www.ucpmidtn.org.