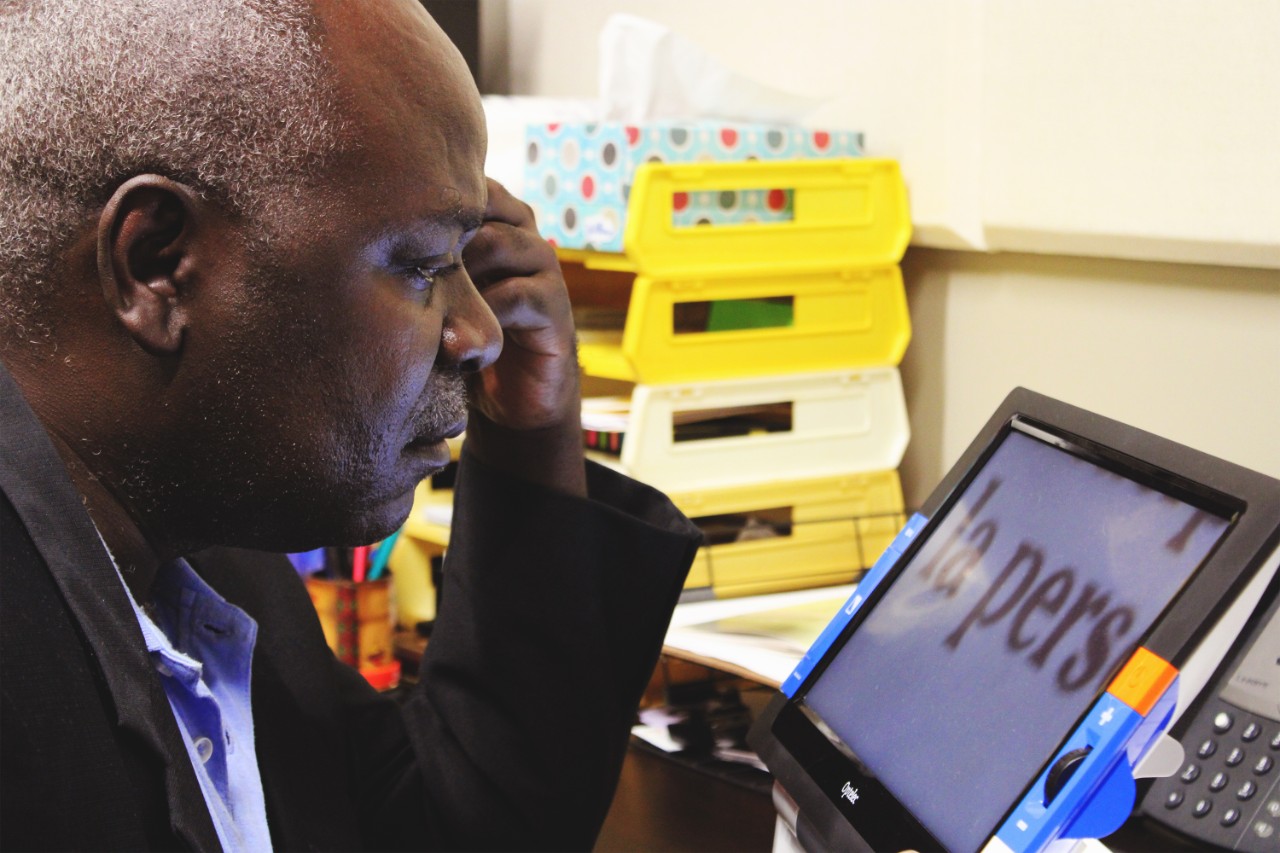 Ernest Tshisweka was born in the Democratic Republic of Congo. He speaks eight languages and has a Bachelor’s and Master’s degree in theology and counseling. The 56-year-old came to the United States in 1996 as a Nigerian refugee. He returned to Africa in 1997 as a missionary, working in Congo, Ghana, and Zambia. Because of rising tensions with militias and the Congolese government, Ernest moved back to the US in 2009, never expecting that he would experience a major change in his life.

In 2015, Ernest suddenly lost his vision, which greatly affected his ability to continue working. At the time, he was working for Life Bridges as a Direct Support Professional, helping other individuals who had disabilities. His sudden vision loss made it extremely difficult to use computers and telephones, and to get around safely in his environment. He was referred to Signal Centers by Southeast Vision Rehabilitation, and began training on computer and phone access, orientation and mobility (O & M), and adjustment to blindness classes.

Ernest became quite skilled in the Cooking without Looking class. Lana Little, the director of the program, recalls his first introduction to cooking. “When Ernest first came to us, he was literally eating cold food out of cans,” she explained. “We asked him to bring in some recipes of the kind of cooking he missed from his homeland, and we helped him figure out the process of how to make those meals.”

Ernest now cuts up vegetables like a prep cook and makes Nigerian stews in a crockpot by himself.

Assistive Technology Services then helped connect Ernest with the Senior Community Service Employment Program (SCSEP), a federally-funded program run locally by Goodwill. That program was able to find meaningful work for Ernest at Vive for a Dream Immigrant and Refugee Services in Cleveland, Tennessee. “As a former refugee, I am very concerned about the lives of refugees, especially in situations where people are trying to flee from one dangerous place to another,” said Ernest. “That’s why I am here at Vive, because I love refugees.”

Ernest is able to support himself with the help of assistive technology and using his knowledge of other languages. He is also in the process of bringing his wife and two children to the U.S. “Because I was introduced to the phone and how to use it, I found a better way to communicate with my family using apps like WhatsApp,” he said. “I prefer to communicate with them using WhatsApp rather than the regular phone because it is easier to use by myself.”

Technology has helped Ernest work, and keep his family together. He is one of the many people who have experienced unexpected vision loss. With the help and support of Signal Centers’ Assistive Technology Services, many individuals develop the skills needed to enhance and maintain their independence.