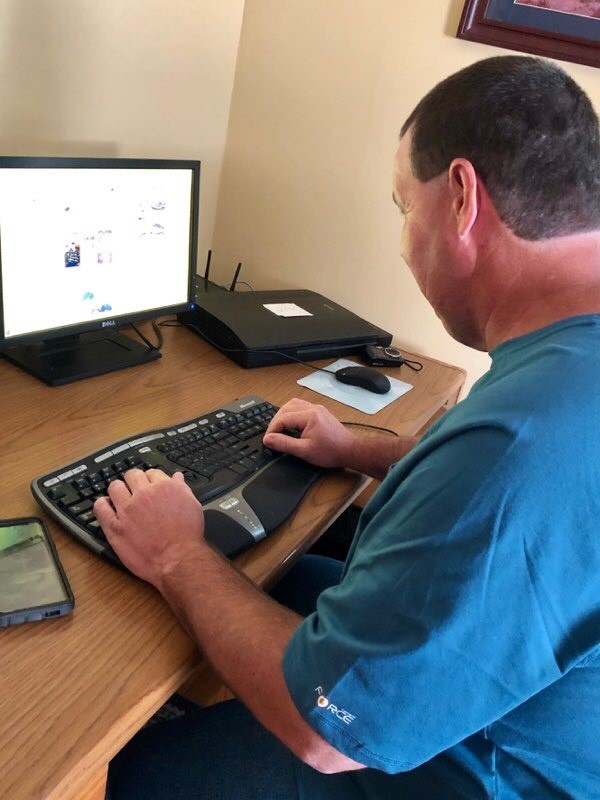 When thinking of technology, most people consider how it enables them to stay connected with family and friends, makes their lives simpler, or even makes a job task easier. We all use technology in our lives, but imagine for a minute what life would be like without it.

Jeff’s vision began to decline when he was in high school, and it made participating in the regular education curriculum difficult. He was not provided with many supports to overcome his barriers with academics, and was merely passed through to graduation. When asked what he thought life would look like after graduation, Jeff replied, “I thought I would be a tradesperson. I wanted to build things.”

However, after receiving his diagnosis, Jeff knew he would need to look for other options. He spent the next years working odd jobs with his father and for a couple of years away from his family in sheltered employment.

At the age of 29, Jeff was referred by his Vocational Rehabilitation (VR) counselor to STAR Center for services. Without even knowing the letters on the computer keyboard, Jeff was unaware of the opportunities Assistive Technology would offer him in the future.

Shortly after his referral to STAR Center, Jeff made a connection with a local businessman and began buying and selling flatbed trailers. In the early days, swap-and-shop on the local radio and the buy-sell-trade flyer in his rural area were his primary means of conducting business. “It felt good to sell my first trailer,” he said. “I had no doubt I could do it, but selling that first trailer was confirmation for me.”

As his company, Green’s Equipment Sales, grew, Jeff’s VR Counselor referred him back to STAR Center for help with his self-employment plan. Jeff was given a workplace evaluation to learn how technology could aid him in further growing his business. Jeff was introduced to the computer and a variety of Assistive Technology devices to improve his efficiency and independence with his business. Gradually, he learned to use a money reader, a digital camera, and voice-recorder-to-screen-reader technology. He began learning to type and gaining basic computer skills while also working hard to acquire the skills needed to use screen reader technology to access the computer and the programs he needed.

With the assistance of VR through his self-employment plan, Jeff was able to obtain the equipment needed to expand his business into a fully-online operation. Jeff has returned to STAR Center to learn new skills and evolve his business as technology has advanced over the past 15 years. He now uses text-to-speech and voice input features of a smartphone to check email, make business calls, and send/receive texts. Jeff’s trailer business is now operated primarily online via Craigslist and Facebook Marketplace. With those websites, Jeff is able to sell approximately 60 trailers each year to buyers from as far away as Colorado, Ohio, and North Carolina.

During times that he doesn’t have an active VR case, Jeff is able to receive technical assistance and device demonstrations through the Tennessee Technology Access Program (TTAP) at STAR Center. TTAP is a statewide program to help individuals with disabilities gain access to Assistive Technology devices and services in order to maintain or improve their level of independence, even with limited resources. TTAP ensures that Jeff has access to technical support or loaner technology in the event his equipment isn’t working, and it enables him to stay informed about advances in technology that could benefit his business or ability to live independently.

In 2004, technology did not offer what it does today for any of us – but especially for individuals like Jeff. Having the determination to acquire new skills, Jeff claims the secret to his success has been, “Don’t ever say you can’t do something; there’s always a way.”