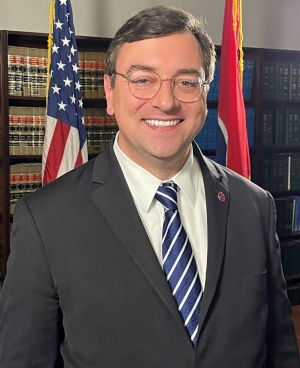 Jonathan Skrmetti was sworn in as the Attorney General and Reporter for the state of Tennessee September 1, 2022. He was appointed by the Tennessee Supreme Court to serve an eight-year term.

Prior to his work on behalf of the State of Tennessee, General Skrmetti was a partner at Butler Snow LLP in Memphis. Before joining Butler Snow, he served as a federal prosecutor for almost a decade, first at the Civil Rights Division and then as an Assistant U.S. Attorney in Memphis. In addition, General Skrmetti taught cyberlaw as an adjunct professor at the University of Memphis.

General Skrmetti earned honors degrees from George Washington University, the University of Oxford, and Harvard Law School, where he was editor-in-chief of the Harvard Journal of Law & Public Policy. Following law school, Jonathan clerked for Judge Steven Colloton on the U.S. Court of Appeals for the Eighth Circuit. He resides in Franklin, Tennessee, with his wife and four children.