Hi-Resolution Images of the Portrait and Prize are available at this link.

“This is a unique opportunity for Tennesseans to get a glimpse of a truly rare artifact that acknowledges an even rarer achievement,” says Dan Pomeroy, Tennessee State Museum chief curator and director of collections. “What Hull accomplished in the founding of the United Nations has had a lasting impact on the generations of global citizens that followed. And his story started here, in Tennessee. We’re thrilled to partner with the Friends of Cordell Hull, Pickett County to share this story with our visitors.”

The Museum will complement the display with two digital programming events delivered through the Museum’s WebEx videoconferencing platform. On Wednesday, October 14 at 12 p.m. CDT, as part of its ongoing Lunch and Learn series, the Museum presents “Cordell Hull: Father of the United Nations,” a lecture on Hull’s legacy by Dr. Galen Hull, author of Cordell Hull and His Legacies: Champion of Civility and The United Nations at 75, and  VP of External Relations for the UNA-Nashville Cordell Hull Chapter. On Saturday, October 24 at 2 p.m. CDT, the Museum presents a panel discussion to mark United Nations Day. Moderated by Dan Pomeroy, Tennessee State Museum chief curator and director of collections, “In Conversation: The Life and Legacy of Cordell Hull and the United Nations at 75 Years” includes Dr. Kurt Piehler, associate professor of history at Florida State University and director of the Institute of World War II and the Human Experience; Bob Teague, president of the UNA-Nashville Cordell Hull Chapter; and Monique Johnson Hodge, park manager at the Cordell Hull Birthplace State Park. Both events are presented in partnership with the UNA-Nashville Cordell Hull Chapter. Links will be posted on the events calendar at TNMuseum.org.

The United Nations formally came into existence seventy-five years ago, on October 24, 1945, when a sufficient number of nations adopted its charter.  The creation of that charter and the UN itself was largely due to the untiring efforts of Cordell Hull, the U.S. Secretary of State from 1933 to 1944. In 1945 Hull received the Nobel Peace Prize, in recognition of his work in creating the United Nations. Hull came from modest Tennessee roots, having been born in a log cabin in a remote area of the Cumberland Mountains in 1871. He was bright and ambitious, receiving his law degree at the age of twenty and then serving in the state legislature. In 1907 he was elected to the U.S. Congress and in 1930 to the Senate. A few years later newly elected President Franklin D. Roosevelt asked him to serve as Secretary of State.

Hull served as Secretary of State during a tumultuous time, as world-wide economic depression created uncertainty and escalating militarism erupted in the violence of World War II. Hull worked tirelessly with other nations during this time to create a world organization upon which lasting peace could be achieved. President Roosevelt nominated Hull for the Nobel Peace Prize and referred to him as the Father of the United Nations.

The legacy of Hull, who died in 1955, is recognized in numerous places in Tennessee, including the Cordell Birthplace State Park and Museum in Pickett County, the Cordell Hull Dam on the Cumberland River in Carthage, and the Cordell Hull building in the Nashville, which houses the state legislature.

The Tennessee State Museum, on the corner of Rosa L Parks Blvd. and Jefferson Street at Bicentennial Capitol Mall State Park, is home.to 13,000 years of Tennessee art and history. Through six permanent exhibitions titled Natural History, First Peoples, Forging a Nation, The Civil War and Reconstruction, Change and Challenge and Tennessee Transforms, the Museum takes visitors on a journey – through artifacts, films, interactive displays, events and educational and digital programing – from the state’s geological beginnings to the present day. Additional temporary exhibitions, including Ratified! Tennessee Women and the Right to Vote, explore significant periods and individuals in history, along with art and cultural movements. The Museum is free and open to the public Tuesdays to Saturdays from 10 a.m. – 5 p.m.. and Sundays from 1 p.m. – 5 p.m. For more information on exhibitions and events, please visit tnmuseum.org. 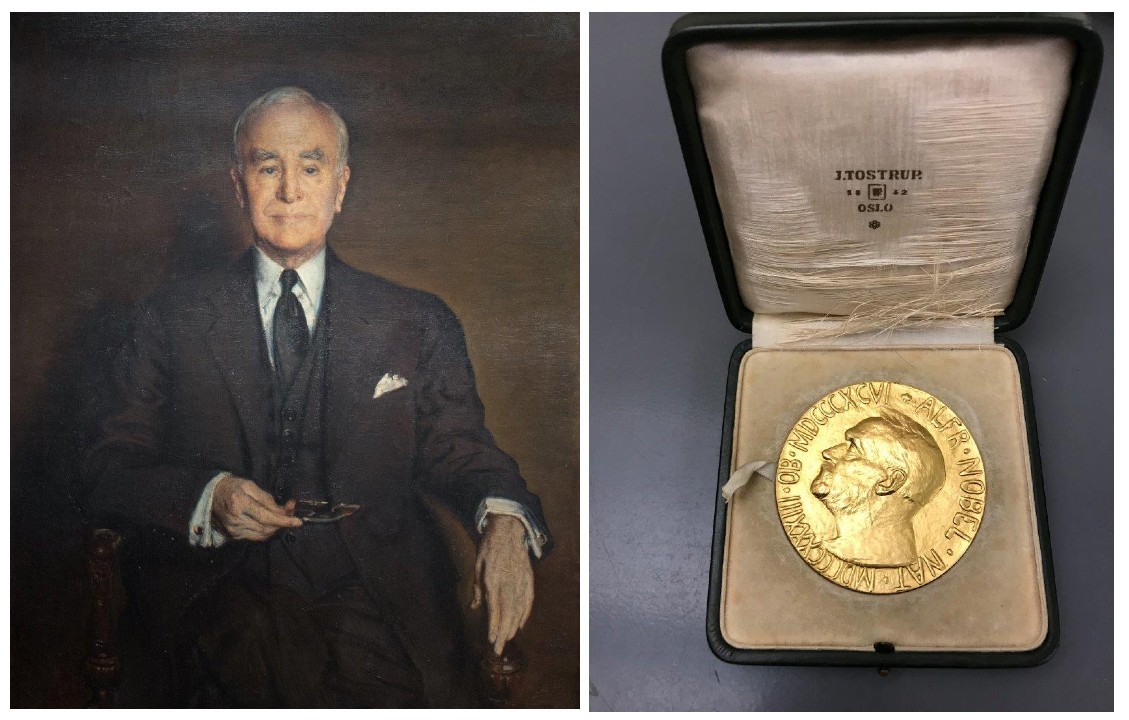 Oil on canvas portrait of Cordell Hull, from about 1945 by Casimir Gregory Stapko, after a 1943 portrait by Edward Morris Murray, which hangs in the State Department in Washington, D.C. (Tennessee State Museum Collection, 88.162); Cordell Hull's Nobel Peace Prize, 1945, on loan from Friends of Cordell Hull, Pickett County, Tennessee.  Download hi-res versions at this link.