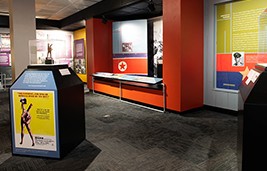 Please note: The Tennessee State Museum Military Branch, an outpost of the Museum located in historic War Memorial Building in downtown Nashville, is currently closed for exhibition updates. It is scheduled to reopen on Friday, January 10, 2020.

Those wishing to engage with Tennessee military history during the Military Branch’s closure are invited to visit the Tennessee State Museum’s main location at 1000 Rosa L. Parks Blvd. at Bicentennial Mall Capitol State Park, where exhibitions include Tennessee’s role in foreign wars as part of its chronological history of the state, including a temporary exhibition commemorating the 100th anniversary of WWI, Tennessee and the Great War: A Centennial Exhibition.

A branch of the Tennessee State Museum, the Military Branch Museum is located in the War Memorial Building, across the street from the main facilities. Exhibits deal with America's overseas conflicts, beginning with the Spanish-American War in 1898 and ending with World War II in 1945.

There is no admission charge to the Military Branch Museum’s permanent and temporary exhibitions.

Hours:
The Military Branch galleries are open Tuesday through Saturday from 10 a.m. – 5 p.m. Closed on Sundays and Mondays.

History:
Originally built in 1925 to honor those Tennesseans who served in the First World War, the Museum was initially established by the state legislature to house veteran’s souvenirs beginning with the Spanish-American War. It has since grown to include military engagements throughout the twentieth century to more recent conflicts.

In the Changing Gallery:
The Tennessee State Museum is pleased to announce that its exhibition, Remembering the World War I Doughboy: The History of Tennessee’s War Memorial, on view at the Military Branch Museum, has been extended due to popular demand.The exhibit highlights the history behind the War Memorial Building which was built in 1925 as a result of Tennessee’s efforts to preserve the memory of those who fought and died in World War I.