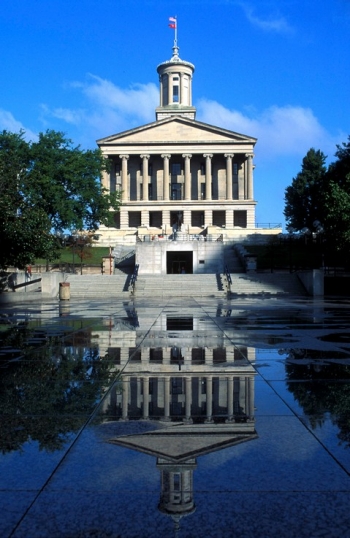 The Tennessee State Capitol stands today much as it did when it first opened in 1859, and is a magnificent tribute to the people of Tennessee. This graceful structure was designed by noted architect William Strickland who considered it his crowning achievement. When Strickland died suddenly during construction in 1854, he was buried in the north facade of the Capitol.

The cornerstone for the building was laid on July 4, 1845, and construction finished in 1859. The grounds of the State Capitol contain statues honoring Sam Davis, Sgt. Alvin York, and Presidents Andrew Jackson and Andrew Johnson. The tombs of President and Mrs. James K. Polk are also located on the Capitol grounds.

Hours for Women’s Suffrage Tour (Fridays at 1 p.m.)To commemorate the 100th anniversary of the ratification of the 19th amendment, which happened in Tennessee on August 18, 1920, The Tennessee State Museum offers a new guided Women’s Suffrage-themed tour of the historic Tennessee State Capitol. The tour tells the story of women’s suffrage, which secured the right to vote for women nationwide, in the place where it happened. Join us to learn more about the movement in Tennessee, how local suffragists mobilized support and what happened in those fateful moments leading up to the climactic vote in the House Chamber. Approximate tour time: 45 minutes.All regular and Women's Suffrage tours begin at the Information Desk on the first floor. No reservations are required.

Click here to learn more about the Tennessee State Capitol