UPDATED: Tennessee State Museum Explores the History of Women’s Suffrage in Ratified! Tennessee Women and the Right to Vote

8,000 Square-Foot Exhibition, Opening Date TBD, Commemorates the Role of Tennesseans Statewide Leading to Ratification of the 19th Amendment in 1920 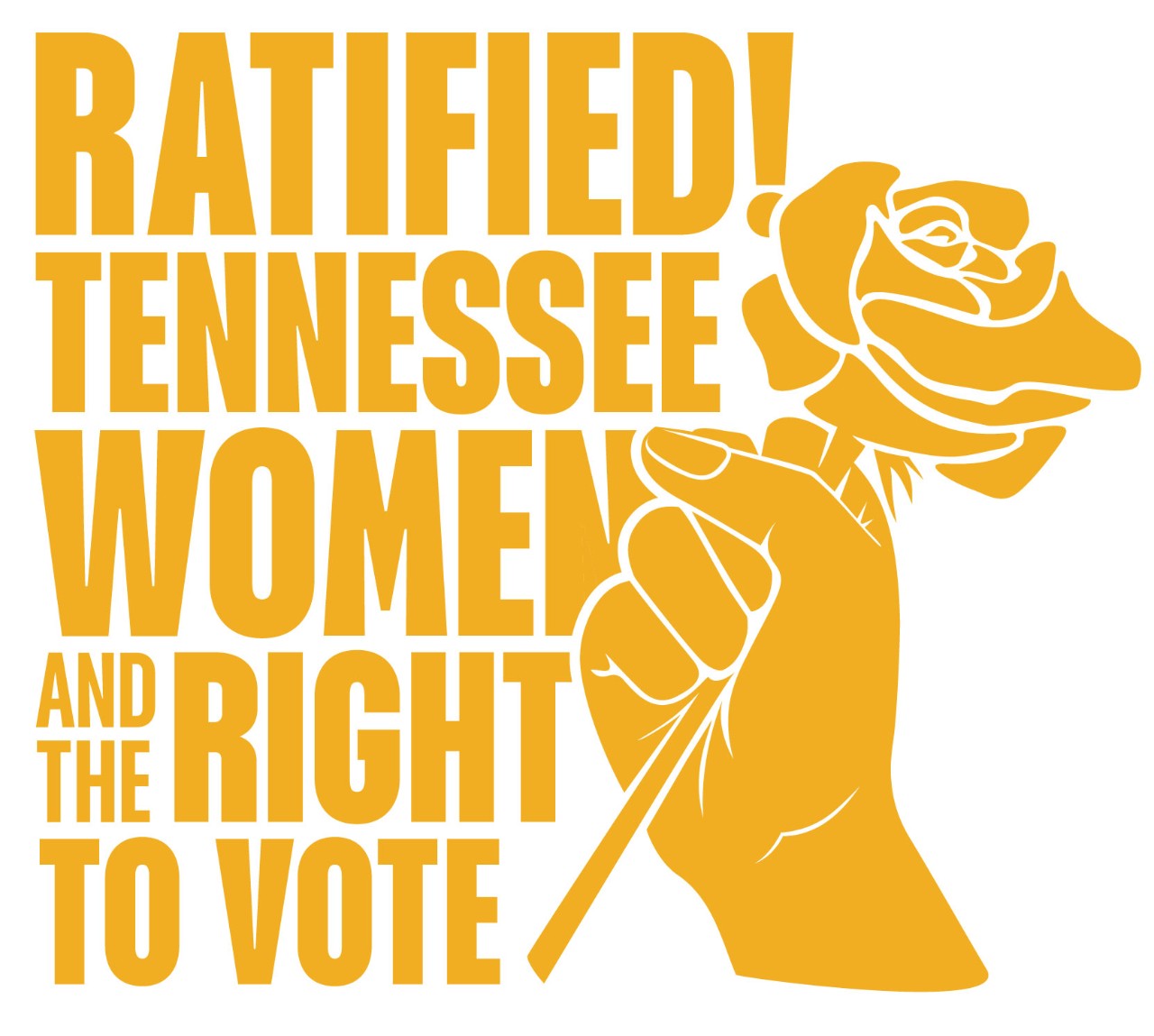 UPDATE APRIL 13, 2020 - PLEASE NOTE THAT THE MUSEUM WILL REMAIN CLOSED UNTIL ATLEAST APRIL 30, 2020, FURTHER DELAYING THE OPENING OF THIS EXHIBITION. ITS OPENING DAY REMAINS TBD.

Due to delays caused by the recent tornados in Middle Tennessee, the Tennessee State Museum is rescheduling the opening of its new exhibition, Ratified! Tennessee Women and the Right to Vote, to Friday, April 24, 2020. It will run as scheduled through March 28, 2021. This updated release reflects those changes.

NASHVILLE, Tenn. – January 29, 2020 | UPDATED March 10, 2020 – The stories of Tennesseans’ roles within the women’s suffrage movement – culminating with Tennessee’s ratification of the 19th amendment 100 years ago – are at the heart of a new 8,000 square-foot, two gallery exhibition at the Tennessee State Museum. Ratified! Tennessee Women and the Right to Vote opens April 24, 2020, and runs through March 28, 2021.

In August of 1920, the nation’s eyes were on Tennessee. The 19th Amendment, granting women the right to vote throughout the country, had passed at the federal level a year earlier, and was making its way through state legislatures for ratification. It needed 36 states to approve it, and was stalled at 35. Tennessee was its best hope for ratification. The final vote for ratification at the State Capitol in Nashville on August 18, 1920 was historic not only in its outcome, but for its thrilling 11th-hour circumstances and the great uncertainty surrounding that outcome. There is, of course, much more to the story.

In Ratified! Tennessee Women and the Right to Vote, curated by assistant chief curator Miranda Fraley Rhodes, Ph.D., the
Tennessee State Museum explores the circumstances in and around Nashville that August, but also delves into the story of women’s suffrage throughout the entire state of Tennessee in the decades leading up to the vote – and its impact on the century that followed.

“The ratification of the 19th Amendment was a major step forward in recognizing women as equal participants in American democracy and public life,” said Rhodes. “For Tennessee women, this was especially important. They continued to face discriminatory laws that limited their rights to their children and prohibited them from activities like serving on juries. With the power of the vote, women gained a critical tool to demand change from state and local governments. It was a milestone in American and Tennessean women’s ongoing search for equality.”

From the state’s beginnings, women found ways to express their political views. In the 1840s, a national women’s suffrage movement began to develop in the North, with the 1848 Seneca Falls Convention – the first women’s rights convention held in the United States – acting as the movement’s launch event.  After the Civil War and Reconstruction, Tennessee suffragists took up the cause and spent many years building the movement within the state despite considerable opposition.

Together with the stories of those women who represented the movement on the national stage, like Elizabeth Cady Stanton, Sojourner Truth and Susan B. Anthony in its earliest days, and Ida B. Wells, Carrie Chapman Catt and Alice Paul later, the exhibition highlights the stories of suffragists throughout Tennessee. Visitors will learn about the activities of the Maryville College Equal Suffrage Club, the Tullahoma Equal Suffrage League, and a suffrage parade in McKenzie that included “a column of young boys and girls afoot, waving balloons and banners…” Across the state in cities, towns, and rural communities, women like Abby Crawford Milton of Chattanooga, Juno Frankie Pierce and Anne Dallas Dudley of Nashville, and Lillian Perrine Davis of Lexington, among many others, worked to further the cause, despite much opposition.

Ratified! Tennessee Women and the Right to Vote at the Tennessee State Museum is told through six major sections that include Women’s Search for Political Rights, Why Women Want the Vote, Tennessee Suffragists, Women Gain the Vote, Changing the Political System. A final section will provide an opportunity for visitors to watch a film and reflect on the history of the suffrage movement. The exhibition uses artifacts, documents, archival photos, large-scale graphics, videos, interactive elements and public programming to share the stories of the Tennesseans who came to have decisive roles in American women’s struggle to gain voting rights. Further information about the exhibition and related events, including 100th anniversary commemorations of the ratification of the 19th Amendment will be posted on the Museum’s website at TNMuseum.org.

The Tennessee State Museum, on the corner of Rosa L Parks Blvd. and Jefferson Street at Bicentennial Capitol Mall State Park, is home.to 13,000 years of Tennessee art and history. Through six permanent exhibitions titled Natural History, First Peoples, Forging a Nation, The Civil War and Reconstruction, Change and Challenge and Tennessee Transforms, the Museum takes visitors on a journey – through artifacts, films, interactive displays, events and educational programing – from the state’s geological beginnings to the present day. Additional temporary exhibitions explore significant periods and individuals in history, along with art and cultural movements. The Museum is free and open to the public Tuesdays, Wednesdays, Fridays and Saturdays from 10 a.m. – 5 p.m., Thursdays from 10 a.m. – 8 p.m. and Sundays from 1 p.m. – 5 p.m. For more information on exhibitions and events, please visit tnmuseum.org. 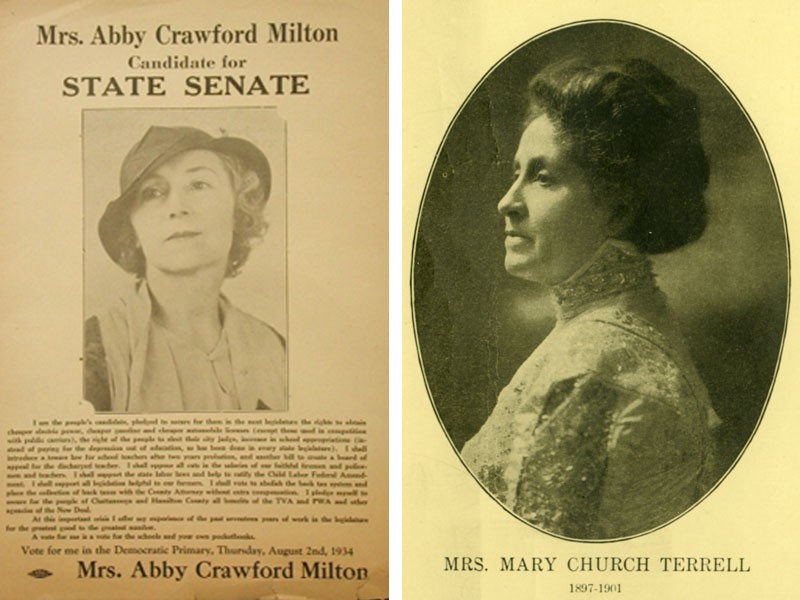 Pictured: Left: Abby Crawford Milton was a suffragist and president of the Tennessee Equal Suffrage Association and was one of the leaders of the campaign in Tennessee to ratify the 19th Amendment in 1920. In 1934, she ran as a Democrat for State Senate. Right: Mary Church Terrell, of Memphis Tennessee, fought for women's suffrage and civil rights and served as the first national president of the National Association of College Women from 1897-1901. High Resoltuion images are available at this link.