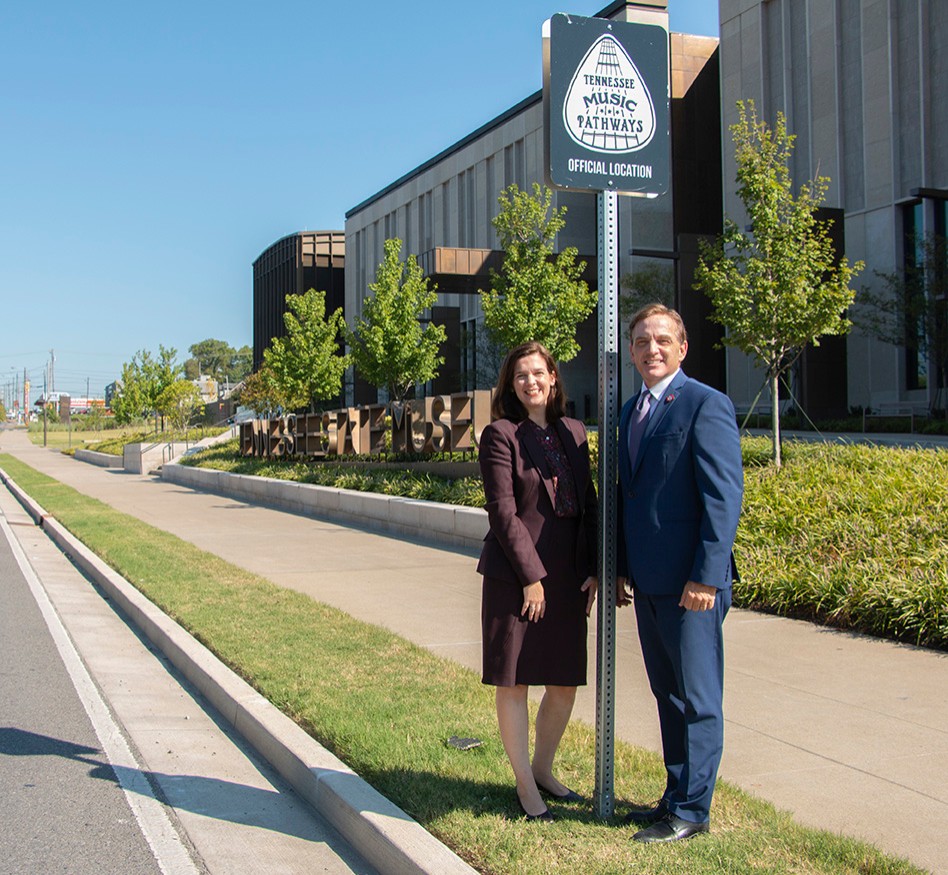 NASHVILLE, Tenn. – September 9, 2019 – The Tennessee State Museum has been officially designated as a stop on the Tennessee Department of Tourist Development’s statewide Tennessee Music Pathways trail. The designation, marked with a sign near the Museum’s Rosa L. Parks entrance at its Nashville location and an entry on the Music Pathways website, recognizes the Museum’s significance in identifying, explaining and preserving the legacy of music in Tennessee. Music Pathways locations connect visitors to the people, places and genres significant to music history.

“We’re honored to be a part of Music Pathways,” said Ashley Howell, Tennessee State Museum executive director. “Thanks to the Music Pathways initiative, visitors can plan their visits to locations throughout the state where that music was crafted, where its creators are honored, and where its history is told. The Museum is one of those places, where every day we tell the story of Tennessee and its contributions to music.”

The Music Pathways designation comes as the Tennessee Department of Tourist Development gets ready to celebrate the state’s significance in country and roots music history as outlined in the new Ken Burns 16-hour PBS series, Country Music. Tennessee plays a major role in the documentary, from the Bristol Sessions in East Tennessee that produced the first commercial recording sessions of Jimmie Rodgers and the Carter Family; to the birth of rock ‘n’ roll in Memphis and its subsequent influence on country music; to the Grand Ole Opry and the growth of Nashville into the center of the genre’s publishing and recording industry. Country Music: A Film by Ken Burns, begins on Tennessee PBS-member stations and on PBS online on September 15.

“The Tennessee Music Pathways inspires visitors to discover the places and stories and seven different genres of music that make our state the Soundtrack of America,” said Tennessee Department of Tourist Development Commissioner Mark Ezell. “The pathways take music fans and history lovers to iconic spots, off the beaten path to discover hidden gems, to large cities and smaller communities. It’s a true pilgrimage across the state giving visitors a lifetime of memories through music.”

Currently on exhibition through February 2020 at the Museum, The State of Sound: Tennessee's Musical Heritage illustrates the development of Tennessee music through artifacts and audio-visual media. The visitor learns about the merging of Southeastern Indian, European, and African American styles, laying the framework for traditions, including folk, spiritual, and even classical music. The visitor will also understand technological and cultural changes that effected the development of hybrid forms like ragtime, rhythm and blues, gospel, rock and roll, and soul, all of which were produced and played by Tennessee musicians. Throughout the gallery, from “Discovering Tennessee’s Musical Roots” to “Tennessee Music in the Industrial Age” to “Tennessee Music Comes of Age (1910-1945)” and finally “Taking Tennessee Music to the World,” the visitor is introduced to the people, places, and events that transformed Tennessee into an internationally celebrated music center through an array of artifacts. Highlights include an early Parlor Guitar from Pulaski, images and records connected to the Fisk Jubilee Singers, a bow tie worn by Jimmy Rodgers, and a performance outfit worn by Isaac Hayes.

In the Museum’s permanent gallery, Tennessee Transforms (1940-present), iconic Tennessee-connected artists are celebrated through performance outfits, instruments and more. Among those artists included are Johnny Cash, Dolly Parton, Tina Turner, Booker T and the MGs, Loretta Lynn and Jason and the Scorchers.

About the Tennessee Department of Tourist Development

Tennessee is the home of the blues, bluegrass, country, gospel, soul, rockabilly and rock ‘n’ roll-delivering an unparalleled experience of beauty, history and family adventure, infused with music that creates a vacation that is “The Soundtrack of America. Made in Tennessee.” In 2018, Tennessee’s tourist industry generates $22.02 billion in economic impact, $1.81 billion in state and local tax revenue and more than 189,757 tourist-related jobs. Explore more at tnvacation.com and join other Tennessee travelers by following “tnvacation” on Facebook, Twitter, Pinterest, Instagram and YouTube or “Tennessee” on Snapchat.