Nashville native, whose work is celebrated in career retrospective at Museum, to be joined Jim Hoobler and Walter Knestrick in free event on Saturday, December 15 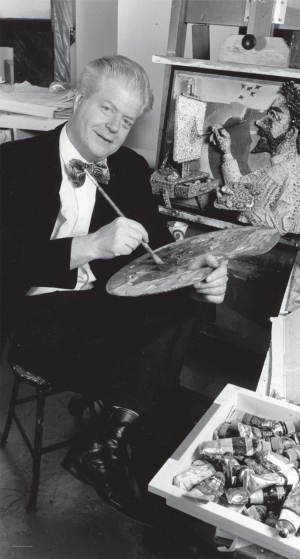 NASHVILLE, Tenn. – November 29, 2018 – Charles “Red” Grooms, the Tennessee-born, internationally-acclaimed pop artist, will discuss his life and work as part of “In Conversation: Red Grooms” on Saturday, December 15 at 2:00 p.m. at the Tennessee State Museum. The event is free and open to the public, though seating is limited and reservations are required. Visitors can RSVP through the Calendar of Events at TNMuseum.org or directly though Eventbrite to secure their seating.

Grooms, whose career is celebrated in the current Tennessee State Museum exhibition, “Red Grooms: a Retrospective,” will be joined in conversation by Jim Hoobler, Museum senior curator of art and architecture, and Walter Knestrick, a life-long friend and collector of Grooms. Attendees are encouraged to visit the exhibition on the second level of the Museum before or after the talk.

“Red Grooms is the most recognized living Tennessee artist,” says Hoobler, who curated the current exhibition. “This sampling of works from his career gives the visitor a look at the evolution of his style, and the whimsical spirit that created it. This conversation is a rare opportunity for the public to hear from a true master of pop art.”

Born in Nashville in 1937, Red Grooms stands among Tennessee’s cultural icons. A performance artist, filmmaker, printmaker, and cartoonist, he is best known for colorful pop art that captured both the grotesqueness and humor of everyday life. He attended Hillsboro High School in Nashville, where he met Knestrick, a fellow art-student. Knestrick became a life-long collector of the graphic works of his friend. “Red Grooms: A Retrospective” contains more than 80 pieces of what Knestrick has generously donated to the Tennessee State Museum, as well as earlier pieces the Museum had acquired. They trace Grooms’ work in the mid-50s, when he focused on the human body, macabre figures, and monstrous faces; into Grooms’ exploration with new media in the 1960s when he began experimenting with 16-millimeter film and three-dimensional pieces; and into the end of the decade when he received his first significant recognition with City of Chicago. The exhibition also covers the next two decades, which see Grooms celebrate major urban environments, with prints and three-dimensional works, and the artist’s look at the rich variety of city life, with gritty depictions of everyday activities, and colorful characters one encounters in city living. From the 1990s to present, Grooms has begun to reflect back, on great artists who came before, as well as the Civil War, examining the battles, leaders, and events of that period in his prints, paintings and sculptural works.