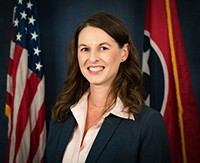 NASHVILLE  – Mary Katherine Bratton, Esq., has been appointed the general counsel for the Tennessee Department of Health, where she will lead an office of five divisions responsible for the legal support of TDH’s bureaus and programs, and the legal work of 36 health-related boards and committees with statewide oversight.

“Mary Katherine was instrumental as a legal advisor and disciplinary counsel with our department for almost a decade,” said Tennessee Department of Health Commissioner Dr. Morgan McDonald. “She guided her staff through thousands of cases, investigations, and both legislative and rulemaking procedures affecting critical decisions in healthcare licensure and regulation in Tennessee. We are thrilled to have Mary Katherine back and look forward to the positive impact her experience and expertise will make on the department.”

As general counsel, Bratton will also serve as TDH’s ethics compliance officer. Since the end of 2021, Bratton served as a team lead for the Office of General Counsel at the Tennessee Department of Environment and Conservation focused on department audit, legislation, and legal support for parks and natural areas.

Prior to her public sector work, Bratton practiced briefly as a contract attorney in Nashville.

Bratton received her Doctor of Jurisprudence from the Regent University School of Law in Virginia Beach, Va. and completed her undergraduate degree at The University of the South in Sewanee, Tennessee.

Bratton and her husband, Ian, a lifelong Tennessean, have called Nashville home since 2011.