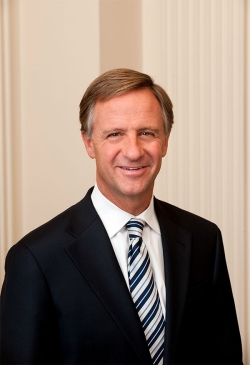 On November 4, 2014, Bill Haslam was re-elected Tennessee’s governor with the largest victory in modern Tennessee history.

Under his leadership, Tennessee is recognized as a national leader in education, economic development, efficient and effective government and fiscal strength.

Since 2011, Tennessee students have been the fastest improving in the country in academic achievement. High school graduation rates are at an all-time high, and Tennessee is the first state in the nation to offer high school graduates and adults two years of community or technical college free of tuition and mandatory fees.

In 2013, Haslam launched the Drive to 55 to increase the number of Tennesseans with a postsecondary degree or credential to 55 percent by 2025. More Tennesseans are going to college and fewer need remediation when they get there. First-time freshmen enrollment increased 25 percent at community colleges and 20 percent at technical colleges in one year, and the college-going rate in Tennessee increased to a high of 62.5 percent in 2015.

Since Governor Haslam took office in 2011, more than 400,000 net new private sector jobs have been created in Tennessee and, last year, Tennessee’s unemployment rate reached the lowest level in state history and has remained close to that record-low rate. Tennessee has been ranked No. 1 for advanced industry job growth, No. 1 for jobs created through foreign direct investment and is a three-time winner of “State of the Year” for economic development by Business Facilities magazine.

The governor worked with the Tennessee General Assembly in 2017 to pass the largest tax cut in Tennessee history while delivering a safe, reliable and debt-free transportation system. He and his administration have cut more than $575 million in recurring spending, shrunk state government by 7 percent, balanced the budget every year, ensured Tennessee has the lowest debt in the country and more than tripled the state’s savings account. For only the second time in state history, Tennessee has been awarded a triple AAA bond rating.

In 2003, Haslam ran successfully for mayor of Knoxville and was re-elected in 2007 with 87 percent of the vote. As mayor, he balanced eight consecutive city budgets, tripled the Rainy Day Fund, focused city government on providing services in an efficient manner, helped found key education initiatives and recruited and retained thousands of jobs to Knoxville.

He and his wife, Crissy, a native of Memphis, have been married for 36 years and are blessed with three children and eight grandchildren. For more than three decades they have been members of Cedar Springs Presbyterian Church (EPC) in Knoxville where Bill serves as an elder.